So there you are, five levels deep in the bowels of a physical manifestation of the raw forces of chaos, beset by creatures bizarre and malicious, low on spells with not even a half a pack of cigarettes nor a full tank of gas.  There are no atheists in foxholes of the mythic underworld phenotype, so you need yourself a god on whom you can call.

Ah, that conundrum as old as the game itself.  The default pseudo-medieval/dark age setting calls out for a Christianity analog, but a fantasy world with an explicit visitation by our Lord and Savior potentially raises the fun-killing specter of idle speculation about what Christ Dying on a Fantasy Cross means for the fantasy world and for our world.  The strictly agnostic basic rules allow for everything from paganism to pantheism to polytheism, and of course, monotheism.  It’s a great cop out that leaves the concepts of Paladins and holy warriors in general bereft of the deeper magic that gives them such punch and import in the literature.  At the same time, the baseline rules leave in such explicitly Christian concepts as devils and angels and posits a wonky kitchen-sink cosmology that solves the problem with a decidedly non-Occam’s razoresque solution that resembles the epicycle explanations of orbital mechanics.  Put more simply, by getting the center wrong, the mechanics of the system become needlessly complex.

Good old Pete, architect of Felltower, uses an appropriately hand wavey explanation of “The Good God”, who is God as we know it in all but name and actual practice.  It’s a great way of forcing the tone to stay light while steering a course close enough to the historical inspiration for medieval fantasy settings without hitting the Two-Jesuses Icberg.  It solves the problem, but leaves things (at least in Peter’s re-tellings) a bit bland. 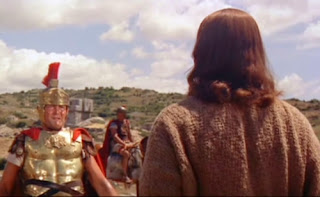 The general faith is called The Faith.  That’s perhaps an odd misnomer when you consider that it doesn’t take much faith to believe in a god whose followers routinely cure diseases and call forth fire from the heavens.  Oh man, see how easy it is to fall into the overanalysis.  It’s The Faith, it just is.  Go with it, already.

As in the real world, there are many names and titles for the guy who gave his life to absolve others  of sun, such as The Great Martyr, the Savior, our Holy Lord, and The Shephard.  The Good Book is also known by its many editions: the Holy Book, the Collected Scriptures, the Word of God, all are appropriately vague enough for a fantasy setting.  And while Christ is never mentioned explicitly, His titles all heavily imply that, yeah, it’s that guy.  A few more examples:

This open call to puns serves a subtle but important dual role at the table.  It keeps the focus of the game on a medieval/dark age European setting, which saves a lot of time as it guarantees that everyone at the table can approach the game with the same basic default understanding of how religion in the game works.  More importantly, it keeps the setting light – it’s an open call-to-pun after all – and encourages the players to jump right in and add to the lore of the Church of You-Know-Who.

You don’t have to go that far down the road of explicit implications, if players want to keep things a little more serious, they can just leave it at The Savior and the Good Book.  But this opens the door to keeping something very serious and central to medieval life in the game, something that resonates deeply in our souls and adds some wieght to the game, but it does so in a way that keeps things at the table fairly light-hearted.

It also let’s us leave the serious religious discussion where it belongs, and where it can be dealt with using the sort of deep introspection and gravity it deserves.  You know, like Twitter.