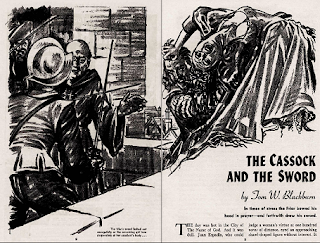 The retro movement that has been elevating the RPG scene for the last decade owes much to people looking back to the fantasy and sci-fi scene of days gone by.  Whether it’s the OSRmovement, the various diggings into the Appendix N list, or P. Alexander’sbroader look at fantasy and sci-fi short story magazines from the 1940s, the investigations into the roots of the stories that inspired adventure gaming has been both informative and inspirational.

Despite all the discussion of magazines and stories dedicated to explicitly fantasy and sci-fi stories, one important area that hasn’t seen quite as much activity is the historical non-fiction adventure market.  That’s not to say that it has gone completely undiscussed; everyone knows that D&D owes a considerable debt to juggernauts of the genre like Zorro, The Three Musketeers, and the stories of Robin Hood.  But if the lesser known works of the pulp sff magazines contributed to the genre and are worth a look, then it’s entirely possible that the lesser known works of other fictional adventurers contributed to the genre and are worth a look as well.  After all, the line between historical fiction and fantasy fiction is often as blurry as the line between fantasy and science fiction.

To that end, I looked through the archive of freely available pulp magazines from PulpMags.Organd downloaded the November 1946 issue of Mammoth Adventurespecifically because the cover art and story featured a man swashbuckling his way through New Spain.  You can’t get much more inspirational than a story featuring a fighting holy man and a swashbuckler fighting against a corrupt city government.

In Tom W. Blackburn’s “The Cassock and the Sword”, that’s exactly what you get when Juan Espadin, impoverished noble from the Old Country, crosses a member of the powerful local ruling family.  His first day in town he rescues an older woman being abused by an old man, only to find that he has inadvertently spoiled an attempt by the underground resistance to capture a member of that corrupt ruling family by killing the man.   Desperate to escape the city, he follows the old woman, revealed to be a sultry young woman named Pepita, to a jungle camp that serves as the headquarters for the resistance.  There he crosses swords with the titular sword-fighting fighting monk, Paco, and his support is bought by Paco and Pepita with promises to aid him in his journey to Panama if he firsts helps free the city from the grip of the despicable Lozan family.

What follows is a fast tale featuring traps, counter-ambushes, captures, and escapes, all featuring the flashing steel, faceless minions, and dastardly villains you expect from a swashbuckling story.  Is it fantasy?  Beyond the fictional setting and characters, no.  Is it inspirational for fantasy adventure gaming?  You better believe it.

This story gives a classic example of a corrupt city government and the way in which one powerful family can use the power of the purse and city guard to cause all sorts of mayhem for player characters.  It does so in a simple enough manner for any DM to implement at his table.  It shows how death is not the only fate to follow poor dice rolls – a good capturing, tossing in the castle dungeon, and villainesque, “I’ll give you the night to think on how I’ll kill you in the morning,” can lead to thrilling escapes, more sword fighting, and everything you want from a tabletop adventure game.

It even includes a less-than-holy cleric whose service to god has more to do with a well handled blade than with a sacramental delivery service.  He may not be terribly pious, technically he may not even be a member of the clergy whose robes he stole, but the stout Brother Paco serves God in his own way, and it’s a way in which any cleric PC should be proud to serve.

The moral this story is that the Prophet Gygax, upon whose writings all others are built, used adventure fiction of all sorts as inspiration for his game.  Although historical fiction gets barely a nod in the sacramental books, it can serve as a catalyst for any game of adventure from the shores of Middle Earth to the stars of the Polity.  Go thou forth and do likewise.
Making Adventure Fiction Great Again
Subscribe today to be first to hear about my new release, plus receive a copy of a free fantasy novella!
Follow