Living in a deep blue state carries with it a host of disadvantages that aren’t worth dwelling upon here.  The deep blue denizens of my particular blue state tend to run to the more passive-aggressive end of the spectrum.  Learning that a Trump supporter walks in their midst will cause them to raise their eyebrows and toss off a bit of snark that is easily countered by direct confrontation.  Mind you, my car’s bumper remains sticker free; the sorts who engage in passive-aggressive sarcasm in face to face conversation are also the sorts to vandalize un-attended car whose owner clearly engages in badthink.

I’m also too lazy to visit the local campaign HQ and pick one up, and way too lazy to scrape the dang thing off in December.  Self-awareness alone precludes me from driving around a car that bears a years-out-of-date political bumper sticker. 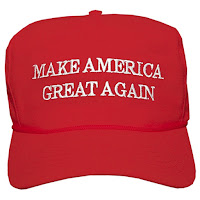 A baseball hat, on the other hand, that’s a whole different ballgame.  My “Make America Great Again” (MAGA) hat never goes anywhere without me, so there’s no need to worry about cowardly backstab-style vandalism.  After the campaign season ends, it can live in the back corner of the closet with the “Detroit Red Wings Stanley Cup Champions” t-shirts.

Wearing the MAGA hat around town, here’s no doubt in my mind that it catches people’s attention.  Not a lot of people, but enough.  People that you pass on the sidewalk can be hard to read, so often it isn’t clear whether the raised eyebrows are an expression of disgust, disbelief, or pleasure.  They barely register, and so likely go un-noticed in most cases.  The people that stop and comment, those are a lot easier to quantify and qualify.

The worst comment I’ve had in three months of wearing the hat has been one guy who said, “Hey man!” and continued walking away showing me a double barreled middle-finger salute.  Far more often has been the thirty-ish beardo asking if I’m wearing the hat ironically.  My response: “Irony is for chumps.”  They never really know how to respond beyond an awkward chuckle and slow, “oookay.”

Far more often, people shout out, “Love the hat!”  Although about half of them feel the need to lean in close and whisper a conspiratorial, “We’re going to win this thing.”  That level of theatrics isn’t necessary, but we live in relatively turbulent times where not everyone is comfortable letting their alt-right freak flag fly.  They’ll get no criticism from me on that score – I save my criticism for people on the other side of the political fight.

The best story I have to date happened this past weekend.  I’m a cardio guy who runs long distance races.  For fun.  My thinning hair now forces me to wear a sweat band to keep my eyes salt-free. The bright red MAGA hat is my favorite sweat band*, and it helps my fan support recognize me as I come trundling up the course.  On Sunday, at mile eight of a half-marathon my stride had slowed to a dispirited walk.  The realization that I’d gone out too fast too early, and that trying to keep up with the younger crowd might have been a mistake, had sucked all the wind out of my sails.  After a minute of walking, some random stranger passed me up, but slowed long enough for a fist bump, a “nice hat”, and then gave me a nice little “let’s go” wave.
It was all the encouragement I needed.  I gutted out the next five miles, and while I might not have set any land speed records, or even beat five years younger Jon’s time, without that little moment of mutual aid, it would have been a much longer day on the course without that bright red hat.

* That hat is actually a terrible sweat band.  It’s hot and it doesn’t wick moisture away from the body like my dedicated runner’s hat.  At times the sweat beads up and drips off the brim, and when it dries out you can see the white salt staining on it.  In just a few months it’s faded a shade or two, and picked up a few grease and dirt stains.  The one wag who pointed out how grubby my MAGA hat is had no response to my counter, “Making America Great Again is hard work.”
Making Adventure Fiction Great Again
Subscribe today to be first to hear about my new release, plus receive a copy of a free fantasy novella!
Follow