It’s official, Dwayne “The Rock” Johnson will play the titular role of Doc Savage on the big screen.  Apparently, it’s been official for a while now, and I’m late to the party.  My guess is that the news washed over me because I have so little faith in Hollywood.  Much as I love the series and the concept, it’s hard to feel anything other than resignation when you read the Rock’s announcement:

HE’S A F*CKING HILARIOUS WEIRDO! Confidently, yet innocently he has zero social graces whatsoever due to his upbringing so every interaction he has with someone is direct, odd, often uncomfortable and amazingly hilarious.

That in and of itself isn’t so bad, but once you start pulling on the string the whole thing starts to unravel.  I have two fundamental objections: 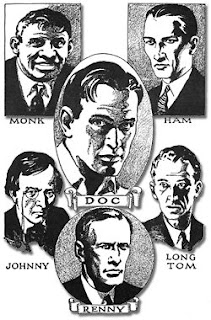 Maybe I’m reading it wrong, but what I read between the lines there is that the production team is planning one of those ‘hilarious’ deconstructions.  This isn’t a case of making a perfect specimen of mankind and then giving him the glaring weakness of having zero social skills, it’s a case of taking the perfect specimen of mankind and mocking not just him, but the idea behind him.  The underlying message of Doc Savage is one of aspiration – this could be you.  The underlying message of this movie seems to be, “don’t be this guy”.

My second objection admittedly relies on a meta-analysis of the situation.  The dozen or so Doc Savage novels that I’ve read focused on the Fab Five.  Doc gives them something to look into, they bumble around, figure it out, have varying levels of success, and then Doc shows up near the end as a walking personification of the deus ex machine and sets things right.  You don’t pay The Rock 20 million dollars for 20 minutes of screen time.  That means this Doc Savage movie will be all about the doc, with the Fab Five given supporting roles.

It may well be true that there are a number of books where Doc was featured from cover to cover – there were 181 of the dang things after all – but the one’s that I’ve read and enjoyed were all about the Fab Five, and until I see that cast list and see an indication that they won’t be given short shrift, and that this isn’t another Land of the Lost – The Mockening, I’m withholding my excitement.