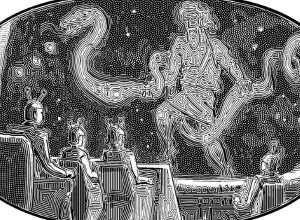 By way of a comment at the Castalia House Blog, an interesting analysis of the shifting sands of The  Politics of Star Trek by Tim Sandefeur.  Worth noting is how the modern refusal to ground Star Trek in the fertile soil of actual, no-fooling morality characterized by stark contrasts between good and evil has drained the weight and import from the genre.  If you refuse to accept the existence of objective good and evil, if the only thing that ever motivates your villains are ‘daddy issues’, if you bridle at the thought of judging people for their vices, then you cannot create compelling storylines that draw people in and inspire them to read more and be better people:

Over nearly 50 years, Star Trek tracked the devolution of liberalism from the philosophy of the New Frontier into a preference for non-judgmental diversity and reactionary hostility to innovation, and finally into an almost nihilistic collection of divergent urges. At its best, Star Trek talked about big ideas, in a big way. Its decline reflects a culture-wide change in how Americans have thought about the biggest idea of all: mankind’s place in the universe.

Once you notice this rootlessness, you start to see it everywhere.  Marvel comic books have no idea what makes anyone a villain other than ‘LOL so random’ and ‘white guys because…that’s just how white guys are’.  Star Wars with its vague Empire-Lite who wipes out five planets because five is more than one.  Game of Thrones where every villain gets their moment of zen likability.  Even an otherwise great movie like Doctor Strange with its open admission that the villain delved too deep into the dark arts shies away from considering the full ramifications of the existence of dark arts.

Even the little movie that could, Dredd, for all that it does right, can’t help but bow before the modern throne of ‘it’s somebody else’s fault’ by showing Ma-Ma – a bloodthirsty savage of a woman – as a victim of circumstance.  It’s like, all relative, man.  Dredd’s just some guy with a badge.  But for the chance roll of the dice, he could have been Ma-Ma.  It’s all nonsense and it undercuts the meat of the film.  It doesn’t present Ma-Ma as an unmitigated evil we are glad to see die.  It doesn’t justify the long, lingering, and graphic scene of vengeance Dredd visits upon her.  It doesn’t add nuance and color and gravity to the film, it just undercuts Dredd’s virtue and heroism by forgoing the opportunity to show him as the direct opposite of what he fights.

The world needs heroes, but a Hollywood divorced from heroisms literary, religious, and intellectual foundation cannot conceive of such a man, and so cannot create media in which such a man is shown.

Thank God for legacy and independent publishing, or we’d be starved to soul-death for such things.