Skip to content
Tried out Roll20 for the first time this past weekend.  Not for any of the functionality, just for the video conferencing feature.  Two new friends had a weekend free, so they let me run a quick one-shot dungeon delve using a bastardized B/X.  Basically, the B/X combat and movement, but I let them use whatever reasonable OSR ruleset they had for chargen.  Worked out pretty good.  Here’s a brief rundown and AAR featuring a lot of nice photos and one that sucks.
﻿ 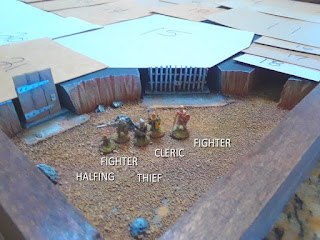 Two fighters, a thief, a cleric, and Butterbucket the halfling inspected all three cave entrances.  They couldn’t pick the lock on the portcullis, and they didn’t like the fancy floor behind door number one…﻿

So they took the right hand cave straight into the heart of the orc goons chillaxing around a firepit. 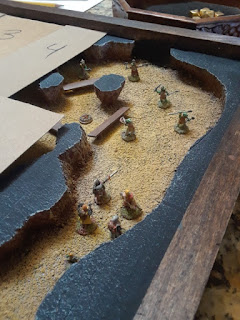 And came through without a scratch.  They tied the orc leader up to the main portcullis, but he escaped into the wilds after making his strength check after they’d gone inside the dungeon. 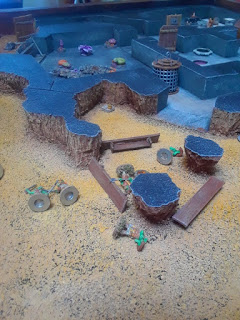 The aftermath with a sneak peek at the rest of the dungeon in the background.

They found their way back to the front grate, but one of the fighters got cut off after springing a cage trap.  Beset by normal bats, he rolled back under the cage thanks to some quick wits and strong as nails companions. 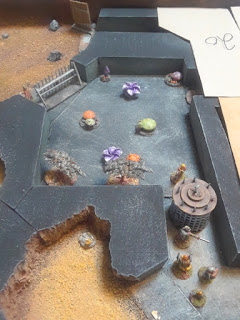 Then down a long hallway, they found the master of the dungeon, a second level magic-user with two veteran guards who managed to kill the thief before being put out of their own misery.﻿ 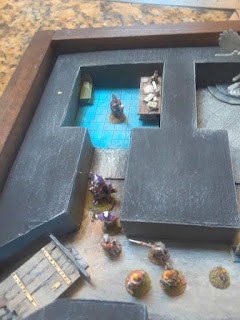 That narrow corridor really turned this fight into a slogfest that worked in the player’s favor.  The door is laying on a rubble pile marking a collapsed cave and the end of the dungeon. 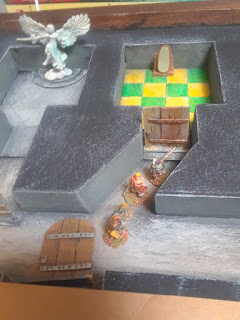 Along the way they found a room full of pools that attacked them, turned a staff magic, and showed them two of the rooms of the dungeon on a successful intelligence check.  They also played around with a magic healing statue (shown on the left) and a magic mirror (shown on the right) that they played with for a while, didn’t trust, and basically left alone rather than risk fighting duplicates of themselves.  Sometimes not playing is the smart way to play.
﻿ 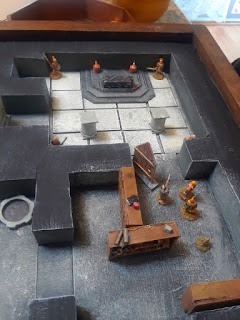 Then it was time to loot the library, fight some skeletons in the dark temple, and say goodbye to the cleric.  His loss in the first round of combat made the fight tougher than it would have been if one of the fighters had died early, but they prevailed, recovered the loot from that alcove in the back of the room, and got out with over 500XP.  Not a bad haul for a four hour delve.﻿
﻿ 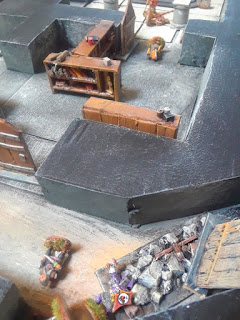 And here we see the remains of the fallen.  The thief in the bottom, and the cleric in the upper part.  Long shall the names of whatshisface and whozit be remembered in the annals of faceless dungeon plungin’ players.
If you liked this AAR, you would really enjoy my collection of dragon slayer novellas.  Featuring one tale each for fighter, thief, cleric, and wizard, it even has a bonus tale told from the point of view of an ancient dragon woken from its slumber by ruthless but well meaning conquistadors.