This past weekend, The Barbarian Book Club challenged his fellow bloggers to read three Fantasy stories written before Lord of the Rings was published, review all three on your blog, focusing on pre-Tolkien differences of similarities, and making sure you let us know where we can find them for ourselves, and share the challenge.

And we are not alone. Drop a link to yours in the comments if you have one.

Project Gutenberg seemed a natural first stop.  It has a host of stories in the public domain, all of which were published two decades prior to Tolkien’s masterpiece.  Within three minutes I had four solid leads, the first of which, Men of Iron by Howard Pyle, proved to be a full blown novel and so got back-burnered.  Looks great, but not really appropriate given its real-world medieval setting.  Which left me with three books of short stories: 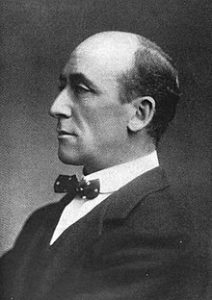 Algernon Blackwood is a new one for me.  His Infogalactic listing includes a quote from a leading Lovecraft scholar identifying “his work [as] more consistently meritorious than any weird writer’s except Dunsany‘s.”  High praise indeed, and yet where’s the love for the guy?  Am I just a poser for never having heard of the man or is this another example of Current Year types like Damon Knight dumping him down a memory hole to make more room for their own mediocre works?  Here’s to hoping the big brains who hang out at the Castalia House blog can help out once they get the backend back up and running smooth.

Whatever the reason for Blackwood’s relative obscurity compared to Lovecraft, I’m glad I found the guy.  The first story in his collection, The Insanity of Jones, kicks off with a bang:

Adventures come to the adventurous, and mysterious things fall in the way of those who, with wonder and imagination, are on the watch for them…

Whoo-ah!  Words to live by!  The story that follows tiptoes along the line of credibility by playing games with the reader by never definitively stating outright that what’s happening consists of real magic, or consists entirely of the ravings of a murderous lunatic.  That it merely leaves open the possibility of magic and reincarnation and past lives intruding on present day circumstances makes this perhaps a poor choice for Alexandru’s pre-Tolkien fantasy challenge.  Oh well, it’s a weird tale in the vein of pre-Toklienian literature when the genre borders were hazier than they are today, so let’s just run with it.

The story is written from the eponymous Jones’ point of view, after all, and in his view the world we know is but half of reality, the other half lies hidden behind a veil through which few people, and of course Jones is one of them, can catch glimpses.  As the wheel of life spins, certain souls get thrown at each other over and over again, and over the course of the story, Jones’ own life circles around that of a fat and piggish Manager that we gradually learn did Jones dirty in a previous life.  Fortunately, Jones also encounters the ghost of a man whom he worked with, a third wheel in the eternal rivalry between Jones and the Manager.  His friend, Thorpe, died several years before in this life, and now returns to help guide Jones  and reveal to him the secret that unites the three eternal players in this drama.

The story features hot emotions, long and dreamy asides punctuated by short and vivid physical descriptions, and an absolutely brutal ending that would make the worst splatterpunk Hollywood director proud.  All of this action weaves back and forth with a past-life torture scene that both parallels and sets the stage for the more modern tale of vengeance.  Blackwood handles the interweaving of these two episodes so gracefully that it seems that the supernatural is the only possible explanation for the events, with just enough room left over to doubt.  He also includes a veiled figure with burning eyes and a big sword that may or may not exist, but who keeps the chattering witnesses to the climax of the story at bay nonetheless.

If you want to read and decide for yourself, the story is only 29 pages long, and you can find it online here.