Happy All Saints Day!  Don’t forget to ask your favorite Saint to put in a good word for you with the man upstairs.  That’s what they’re here for! 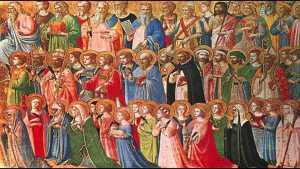 Today we continue our look at the first sentences of stories you can find in the most recent issue of Cirsova Magazine.  If you’re a writer looking to make it through the slush pile, you’ve only got a few minutes to grab the attention of the editor.  Make those first words count.

Today’s first entry falls prey to the “I gotta get a name in there, STAT!” sickness, but recovers with the second half.  Paul Lucas probably knew what he was doing with All That Glitters when he wrote:

Just as he was about to enter the tavern, Theofian Nap was interrupted by his knives, which were talking to themselves.

Wait, what?  Talking knives make for a great hook.  The detail of the Tavern grounds the story in a medieval setting, and the knives announce plainly that we’re in the realm of fantasy.  They also present a mystery that draws the reader in.  That they interrupt their mount makes things all the more intriguing.  It would be nice if Theofian’s name had been swapped with a few details or short archetypal description instead – is he a weary traveler, wealthy aristocrat, or proud knight in armor – but that’s pale criticism in the face of how effective this sentence is.

Contrast with Xavier Lastra’s opening gambit in The Orb of Xarkax:

The local populace knew of that forgettable mountain only for its treacherous ledges and the old tales of bandit hideouts near the top.

Something about this sentence doesn’t work for me.  If the mountain is forgettable, why does it feature in old tales?  The treacherous ledges is a nice touch, as is the promise of bandits, but the overall effect is pretty lackluster.  The second sentence about two men standing warily before a doorway at the base of one treacherous cliff, exposed by a landslide, packs more punch than this first sentence.  Give me a shadowy opening first, a doorway into mysterious depths, and two shadowy figures about the challenge them, then fill in the surrounding details to increase the isolation and mystery.

Michael Tierney does the same thing in Jack’s Basement, but compounds the problem with an avalanche of descriptive text:

The psychologist shifted through the young man’s pile of artwork, each sheet filled with apocalyptic scenes of strange alien beings that were surrounded by dramatic explosions from the havoc and destruction they wreaked.

That’s a lot to pack into a single sentence.  It solves a mystery before that mystery was even introduced, and it spends a lot of time on extraneous details that don’t mesh well with the cold opening of “the psychologist”.  The phrase “strange alien” is repetitive.  It’s wordy, and not in a good way.  One way to give this opening more impact would be to describe the scribbles first, and then introduce the good doctor mulling them over.  Another would be to describe the emotion those scribbles evoke in the doctor first, and then describe the artwork.  Like so:

That scenes of alien creatures surrounded by the detonations of apocalyptic devastation wrought by their presence had been crafted in such loving detail by crayons gripped in a child’s hand troubled the weary psychologist.

There you have basically the same information, presented in a way that allows for the contrast between the horror of the pages and the innocence of childhood, and for the disconcerting effect they have on a beleaguered man of science.  Instead of an emotionless doctor, you’ve got a man both tired and concerned.  Hey reader – there’s something very strange going on here!  It lacks subtlety, to be sure, but it also works.

Let me back up a step here and openly admit that much of my analysis rests on a firm foundation of “in my opinion”.  More importantly, there’s a certain amount of hubris involved with judging an entire work based on one sentence.  Jack’s Basement is a fun story, and one I enjoyed.  The purpose of this exercise is to strip sentences down to the bare functionality.  Whenever you talk about things in isolation you lose the wider view, and in the wider view my criticisms of Tierney and Lactra’s work fall flat on their faces.  Both are talented writers who recover from their first sentence doldrums almost immediately.  You should definitely check out Cirsova and their works, because you’ll enjoy them.  They are, in fact, operating at a high level, and this nit-picking of mine is a close look at those few areas where they have room for improvement.