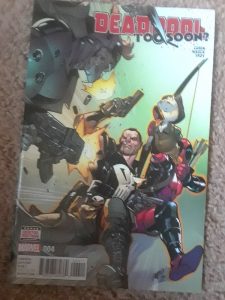 Mainstream comics are so much worse than I thought.  All dazzle, no razzle.

I’m a sucker for ten cent comics, particularly when they are bundled in plain brown wrappers and sold in ten packs to clear shelf space down at the local friendly comic and game and community based brand signal store.  Once my youngest daughter and I tossed the duplicates out, we were left with an even dozen cheap comics passed over by today’s more *koff* discerning comic book readers.

She wanted Spiderman first, and we got a side-story that explained how Doc Ock went forward in time, switched bodies with Peter Parker, got killed moments after downloading his brainwaves into a crawling wristband he shares with an AI copy of his beloved, then came back to the present to trick some rando clone-master villain into rebuilding him a body that he could redownload his brainwaves into and thus be reborn.  That sounds incredibly convoluted and gonzo and awesome, and the art was a great match for the over-the-top sensibility, but the writer never let you forget that he found the whole thing ridiculous to the point of stability.  He went through the motions, but couldn’t resist a lot of sly and smug asides to reassure you he is really above all this silliness.  It sucked all the life out of the story, as did the frequent, “Wouldn’t it be funny if”s.  It had a lot of potential, but refused to consistently treat the material with the respect it deserves.

The second story featured Deadpool and Squirrelgirl’s mutant offspring kidnapping them and then a black shadow guy attacks and it was so silly and then Deadpool’s demon wife shows up and the shadow is a demon stalking her because the real bad guy is toxic masculinity but they cut his johnson off and he’s sad because she cooks rocky mountain oysters and Spiderham and Howard the Duck are there because of course they are.  It’s a cavalcade of cringe as joke after joke falls flat and the writer even has an “explain the joke” joke fall flat because it needs to go all the way around to unfunny-ception.  This thing was as hilarious as a Saturday Night Live sketch.  Ever been around a hot chick that thinks she should be a stand-up comic because thirsty guys laugh at every jokes she makes?  Yeah.

Worst of all, this happens once again largely because everyone involved treats the material with a utter contempt.  They feel like they are marking time until they can get a real job at a real company.  Nothing matters, graphic kills happen regularly to name characters you know will be revived at the end of the issue because ain’t no way Punisher is getting killed by some random demon villain of the week.

Jon Mollison was weaned at the literary knee of Tolkein, Howard, Moore, and Burroughs. He spent decades wandering in the wilderness of modern genre fiction, wondering when the magic and wonder went out of the world of dragons and space ships. In his darkest hour, he encountered a wise man who handed him the open secrets to crafting works that emulate the stories of the great authors who built the genre. They are easily summarized in but two words: Regress Harder. Now one of the twelve champions of the Pulp Revolution, his self-published works represent a more direct lineage to the tales of action, mystery, romance, virtue, and pure unalloyed adventure than the bland imitations churned out by New York City publishing houses in recent decades.
View all posts by Jon Mollison →
This entry was posted in Reviews, Uncategorized. Bookmark the permalink.