You should probably stop reading right now because of spoilers and self-admitted man-babyisms.

The third act of The Lego Movie breaks the third-and-a-half wall.  It doesn’t break the fourth wall and admit it’s really a movie, instead it reveals that the Lego movie so far is actually the play time of a real-world kid who just wants to play with Dad’s basement full of toys.  By the end, Dad realizes that having his own interests and wanting a place to escape from the sometimes overwhelming demands of fatherhood makes him a selfish and horrible person.  Through the magic of Legos he learns that when it comes to the pressures of modern life, there is no escape. 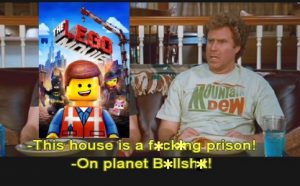 If he builds a club where he can relax with like-minded men, they’ll be outlawed.  If he seeks retreat in new books, they’ll be forced to carry messages about the evils he and his kind hath wrought on the world*.  Not a single television show, not even sports, will be allowed to reflect his interests if they don’t also cater to interests directly opposed to his existence.  The one room in the house where he can shut down his racing thoughts and focus on the slow and careful construction and engineering, the detailed thought and planning that goes into the lavish spread that he built over decades, even that he will not be allowed.  He must sacrifice the time and planning and meticulous attention to detail to serve others.

Not so heart warming when you think about it like that, is it?

If you do see the sequel, note well the state of the once-glorious utopia built by Dad.  Note what happens when you don’t give him a little space and defer to his wisdom.  Consider also how the results of the DAD GETS NOTHING approach to a basement full of Legos translates to our society as a whole.

Did the writers of these films slip one past the Narrative Censors, or did they just deliver more right than they bargained for?

*Yes, we still have indy publishing and books written pre-1980, but you get the point.