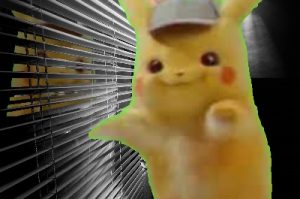 First, the disclaimers:  Came into some gift cards and when going to the movies, it’s better to go see children’s movies.  People talk in every screening these days.  Might as well go to a movie where half the talkers have the excuse of being four year olds.

The lead is a cowardly and stupid bugman who hates Pokémon.  There is literally no reason for the audience to connect with him.  He is incompetent and unlikable to a stomach-churning degree.  I think they tried to paint the Hero’s Journey with broad strokes to make it recognizable to kids.  Or maybe they took the short cut to HumorTown by writing him as bumbling for slapstick reasons.  Either way, but the decision to make him so craven killed any interest in the movie after ten minutes.

Also, he’s a black kid raised by his grandma.  Yeah.  Plot twist – Dad didn’t walk out on him, he walked out on Dad.  Twisted twist:  Turns out Dad is a white guy that’s been trying to be a part of his life ever since Mom died.  Whoops.  How’d that one slip by the sensitivity readers?

The film-makers faced the challenge of introducing non-Pokémon people to the world of Pokémon.  Added to the challenge was a need to explain that the monsters are no longer slaves, they are willing companions and partners of the humans that they tag along behind and mostly obey exactly as though they were partners.  They shoe-horned in a clunky expository video that did the job early so that they could get back to the story.  It was a little on-the-nose, but

Here’s what the film did right:  It’s a noir film for the pint-sized crowd and aside from the protagonist, it works.  It has everything from the strong silhouettes to the convoluted murder investigation, to the billionaire industrialist ready to throw his own offspring down Moloch’s gullet.  They even make nods towards Fake News and the silliness of listicles and clickbait articles.  Like the vastly superior Who Framed Roger Rabbit, the younger set can enjoy the host of Pokémon Easter eggs, while still experiencing a convoluted murder investigation that helps them see there’s more to the world than it seems at first bluch.

It  also features has an interrogation scene that slides down into torture.  No joke, Detective Bugman sort of douses a mime with gasoline and threatens to burn the guy alive if he doesn’t…uh, talk?  He’s a mime, so I sues the word “talk” lightly.  It’s weird, it’s appropriate, and it fits.

It’s actually a natural fit.  A kid-friendly noir detective story faces some challenges in translating the grimdark of adult fare down to age-appropriate material, but the Pokémon world is perfect for this.  The fantasy elements creates a remove that allows children to experience the gut punches of dark material with a layer of psychological insulation.  The Mime interrogation scene makes for a perfect illustration.  The mime guy’s magic power is that whatever he mimes becomes real.  It’s invisible, but it’s real.  So our hero pretends to soak him in gasoline, and like a 40k Ork, his belief means that our hero pretending to light a match just might actually burn the mime guy alive.  It’s a dark concept made light by the make-believe charades and the clownish victim.  And yet…it’s still a pretty dark scene.  It’s like training wheels for more adult fare, and kid’s movies could use more stories along this vein.

The bright spots shine in this movie, but they are surrounded by a lot of clumsy editing, rushed scenes, empty spectacle, and clunky casting choices.  As usual, Hollywood flirts with greatness, but just can’t unclench enough to allow the concept of kid-friendly noir really shine.