Cirsova – The Idol In The Sewers

A thief, strong-armed into stealing an idol from a subterranean inhuman stronghold, is the story of story cliché that has been done to death.  Kenneth Gower breathes new life into this staple of sword and sorcery by not only moving the action underground but by putting the protagonist in the center of a long-running clash between the sewer dwelling ratmen and the deep cave frogmen. 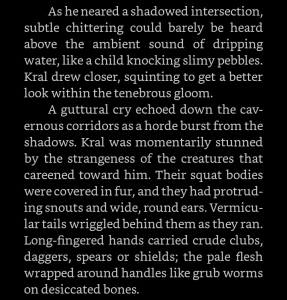 Several things elevate this piece above the routine MacGuffin heist.  Most notably, the non-routine MacGuffin, whose magical properties reach out from the page to manipulate the reader himself.  At one point, the nature of the thing pulled me from the story to question if I had read things correctly.  Reading on, the explanation for the idol’s became clear in the next passage.  The breaking of the fourth wall in this manner normally ruins the flow of a story, but in this case it only added to the sense of alien mystery. 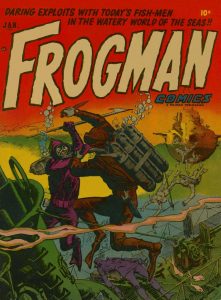 A careful handling of the ratmen and frogmen also elevates this story.  Both are presented as a curious mix of civilized and savage, with no doubt ever entertained that they are at thier core inhuman monsters.  They may have a sense of honor and they may fight well, but they are trapped in prisons of thier monstrous origin.  Prone to backbiting and cannibalism and a life of squalor they are all little better than drug addicts who refuse to kick their habits.  Never  likable, they remain pitifully sympathetic even as thier nature allows our protagonist to do whatever he must to escape the frying pan and fire of being caught between them.

As if that isn’t enough, Gower even managed to squeeze in a tight little romance subplot.  It’s smoothly done, and presents the hero with a much needed moral quandry that forces him to rise above mere thiefdom and into the realms of the heroic.  It’s a nice touch, and emblematic of the kind of compact storytelling that made the pulps so beloved.

I’m not familiar with Gower’s other works.  He’s new to me, and if he can match the energy and precision of The Idol in the Sewers, I look forward to reading more from him.