Cirsova – Born to Storm the Citadel of Mettathok

Author D.M. Ritzlin is one of the creative minds behind the Swords of Steel collection, which is billed as “written by members of such underground heavy metal bands as Manilla Road, Bal-Sagoth, Solstice, Cauldron Born, Twisted Tower Dire, and others.”  Ritzlin certainly captures that ethos with a story of the war for a hot corner of hell that reads like the cover of a heavy metal album.

In Born to Strom the Citadel of Mettathok we have a classic example of how the voice of a story can undermine the narrative of the piece.  The heart of demon-war tale features a newborn demonling sent on his birthday to die on the parapets of the eponymous citadel.  Told from the first person point of view it features an impressively creative kickoff paragraph. 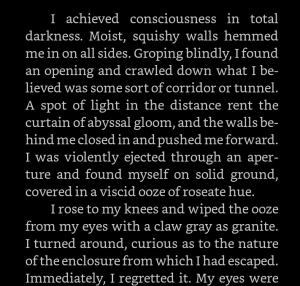 Life immediately gets worse for our plucky little cannon fodder.

As you can already see the little guy has been cursed with enough brains to understand his situation and the vocabulary to lay it out for us in excruciating and stomach churning detail.  That contrast between our bibrained hero and the usual craterbrained hordeling is a rich vein that Ritzlin taps to present a few fun moments.

Unfortunately, his iron clad refusal to shift gears and use a different voice means that the uniqueness of the narrator’s voice vanishes.  The demon-prince who summoned him, the giant guardians of Mettathok’s citadel, and our protagonist himself fight all speak with the same regal and profoundly educated patois.

As it is, it’s hard to know whether the narrator’s rhythms and word choices belong to him or to Ritzlin, and that confusion adds a bit of a drag to an otherwise uniquely creative short.

One could argue that the entire tale is told by the narrator, who becomes a bit unreliable when he paraphrases his less well-spoken encounters to us.  That’s fair.  I have to ask, how much more fun would it have been for him to signal his superior intellect by more accurately quoting his foils?  There’s a value to a consistent voice, but in this compact little story of birth, conflict, and hellish torment, a bit of variety in the speech patterns used would have really elevated the work from a quick vignette to an instant classic.