Let’s celebrate Old Glory by talking about the glories of New Publishing.  We’d better enjoy this holiday while we can – there’s no telling how many more we’ve got left.

Specifically, we’ve got a couple of canaries in the old media’s Woke/Broke Coalmine to talk about.  If you’ve ever wondered why so much of the media pumped out of the Hollywood Sewage Plant ring so hollow, here are two tweets that tell the tale.

The serial number was off this first winner of a tweet out of compassion. It’s not nice to beat up on the mentally ill or mentally challenged like this writer, whose credits include AAA vidya titles like ME: Andromeda (aka, the one that killed the franchise).  The 61,000+ people who liked this enough to agree with this writer, on the other hand… 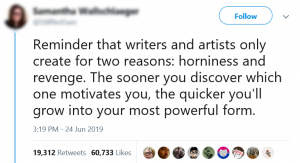 This hot take is so ice cold it’s hard to even know where to begin.  The mindset behind this truly crater-brained take is so alien to even midwits such as myself, that it defies the two-standard deviation communication gap.  It’s hard to imagine somebody earning a dime as a writer when she has such a limited capacity for empathy and a limited ability to crawl into the heads of other people.

If you don’t understand people, you can’t write people.

Writers write for unique reasons.  The cocktail of motivation for writing, as with every human endeavor, cannot be so succinctly broken down into a two-point scale.  Certainly sex and revenge are two possible ingredients, but if that’s all you’ve got in your writer’s cupboard, you aren’t going to be able to produce anything worthwhile.

Binary thinkers make terrible writers.  They lack all nuance, their works are repetitive, and their creativity almost nil.  The best they can do is wrap their spineless tentacles around successful intellectual properties and drag them down into the depths to drown them before floating back up to hunt for new prey.

Which segues nicely into this data point delivered straight from the mind of the man showrunning the Netflix Adaptation of the Wheel of Time: 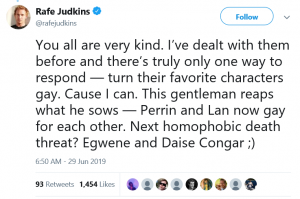 That’s how Hollywood approaches writing.  They don’t get inside the heads of their characters.  They don’t craft a three-dimensional person placed into a complex situation and then puzzle through how that individual, with those character traits, would react to the challenges of the story they build.  Instead, they look to the outside world.  They ask, “How can I use this character to advance my interests?” or “How can I use this character to get back at my real world nemeses?”

The results are as pathetic as they are predictable.

But it makes a lot of sense.  These writers are NPCs.  They have no real internal monologue.  They lurk and observe and incorporate whatever soundbytes the hivemind tells them are fashionable this week into their programming.  They can successfully mimic real human interaction for brief stints, but they cannot lay out the internal thoughts or motivations of the characters they produce because they have no internal thoughts or motivations of their own.  It all boils down to pride and envy and wrath.

Which explains why so many of their characters behave in irrational ways.  They aren’t actual characters at all.  They are mere puppets, bludgeons shoved about on screen, whose choices are dictated by petty real world slights against the writers.  They lack consistency because the only consistent thing about them is that they serve as tools for the writers’ own egos.

Some people may find these hollow shells entertaining.  If you share the writer’s pet bugaboos about the straw orange man.  If you receive the same programming update packages as the writer.  If your part of the writers binary-thinking tribe.  If you don’t notice the complete lack of consistency because you’re content to watch for the spectacle, for the moment, for the now.  And so these kinds of writers can glide along the path of least resistance, selling nothing but revenge porn to their fellow Soma addicts.  But as with every house built on sand, eventually it all comes crumbling down.

In the case of Wheel of Time, if it’s really handled in such a ham-fisted manner, it’s a good bet that “eventually” will arrive before the end of the first season.

I write books.  Books with fully fleshed out characters who don’t always behave the way I want them to behave.  All of them are explorations of ideas, and driven by my own curiosity about people, the world, and the ultimate nature of reality.  If you’ve had enough  of cardboard characters carrying idiot balls back and forth to show those ignorant fly-over rubes a thing or two, declare your own independence by turning away from the woke-broke publishers and give one of my tales shot.  There are links above and to the right – click away, and brace yourself for some pure, unalloyed fun that won’t leave you wanting a shower when you put it down.