There’s a recent fad going around the midwiteratti where they crown thier snoozefest Hugo bait stories with wuh-wacky long titles that are LOL so random:

Just to be a few of more recent vintage.  Long titles like that are tryhard, and don’t bode well for what follows.  They really only work as a tongue in cheek introduction to a good old fashioned gag story, and thankfully that’s exactly what Gary K. Shepherd delivers. 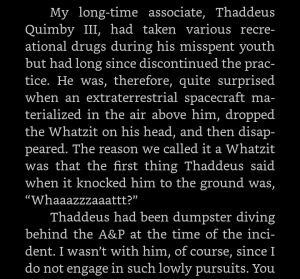 As you can see, we get a modern day Rooster-esque command and his dimwitted palooka of a sidekick who get a fancy-dancy copy machine when it falls off the back of a space truck. Their efforts to use the thing for I’ll purposes turns into a short story that’s pretty much a set-up for the punchline.

Thaddeus speaks throughout with one of those forced colloquial tongues that a bit New Jersey and a bit Old South.  You’ll have to retrain your brain to interpret the usual dropped word endings, added apostrophes, and smashed words.  Some readers have a real problem with authors that resort to this old stand-by, but for my money it’s a great way to paint a character without actually describing him.  Thaddeus talks like a meaty, hairy thug, and you can easily visualize him as the muscle part of a two-bit crime duo.  It saves some description, and does it in an efficient manner.  The way these near-hobos act as near-royalty who just happen to be a little down on their luck adds to the ludicrous nature of the story, reinforcing that Shepherd isn’t delivering the second coming of Dune here, he’s just entertaining you with a fun read.

It’s a nice change of pace to get a light-hearted piece like this after a lot of blood and thunder of the earlier stories.  A bit of a palette cleanser before we dive back into the heat of battle.