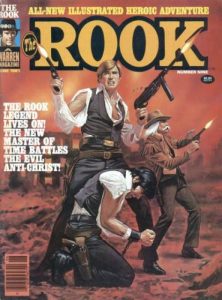 Been doing a bit of adherence to Jeffro Johnson’s general rule of “don’t read anything written before 1980” lately, and that means checking on the long boxes full of black and white comics down to the local Nerd World.

I’ve got a reputation there as a bit of a cheap-skate, waltzing in looking for the Alterna titles, and rarely dropping more than a couple bucks at a shot. Don’t blame me, blame the Big Two and your Diamond monopoly, shopkeep. An honorific I’m proud to wear, but one I’ve failed to live up to as when the Alterna shelf is bare and the Arkhaven shelf non-existent, that leaves me plunging into the long boxes.

As a result, you can check out my review of “The Rook” here.

One bit of not so fun trivia to add to that: According to the Infogalactic page on Warren Publishing, it turns out that he hired Gloria Steinam in 1960 to work on a satire magazine called Help!.  Said magazine also introduced a young comedian named John Cleese to an illustrator named Terry Gilliam.

For all that it’s 1980’s demise consigns it to the dustbin of history and nostalgia-nerds these days, it turns out Warren Publishing has a lot more fingerprints on the current state of fandom than most realize.