You can just barely see the background of the amazing cover of this issue of 1994 includes a Mount Rushmore that has been expanded by two faces – a nice touch indicating that our dinosaur riding caveman is from the far flung future. Presumably that year fourteen years away from the publication date of 1980.  Billed as an “adult” magazine, most of the adult content is actually pretty childish in nature, aside from one gratuitous scene in which the hero and his recently adopted lady-sidekick prepare to embark on a dangerous mission by getting it on. 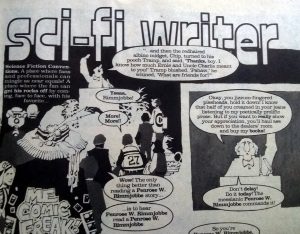 Most of the tales are light fare, and ultimately forgettable.  Sci-Fi Writer on the other hand, shows how little things have changed in fandom over the last forty years.  The titular author and protagonist is a short, balding, and tubby man with a greatly outsized sense of his own importance.  There’s a shot at the author, whose best work consists of warmed over copies of Issac Vodkanov’s work.  A short and stocky and balding author with a greatly inflated sense of his own importance sounds really familiar. 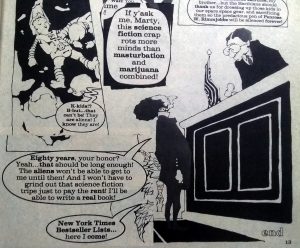 There’s even a shot at how pedos are drawn to sci-fi fandom wherein the Mr. Rimmjobbe promises to teach his benefactors how he picks up little girls at the Hollywood playgrounds.

They knew.  Even back then, they knew.

Being an optimist, I’ll assume the author is taking cheap shots at sci-fi fandom throughout the story. This would be a Mary Sue story if it wasn’t drenched in ironic deprecation of writers and sci-fi fandom in general.  Our long nosed author with the receding hair line gets approached for easy sex by a buxom fan/author, and proves not to be up to the challenge.  He’s a sci-fi author whose work could save the future – hence his targeting by aliens target him for destruction to stop him – but we’re shown what sort of hack writing he produces.  Rimmjobbe is a caricature of the sort of sci-fi author whose delusions of grandeur rival those of an Ignatius P. Reilly.  Even as he is sentenced to an 80-year prison term he strikes that gamma pose, insisting that this is what he really wanted all along.

All that’s missing from Mr. Rimmjobbe is a brag about his banhammer. 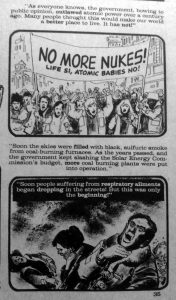 Of all the stories in the magazine, Sci-Fi Writer might be the most prescient, but another tale included an interesting bit of trolling in the pre-internet era.  Set in the last days of humanity, when the ozone had been fully depleted and the earth’s atmosphere choked with smog, things are looking grim for the home team.  Interestingly, the cause of the heat death of the earth wasn’t industrialists, but do-gooder environmentalists who worked to ban nuclear power.

That’s an interesting shot at anti-nuke activists from what otherwise might be considered a counter-cultural magazine.