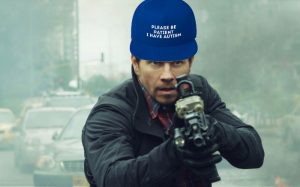 Long flights with no laptop and an empty reading queue on the trusty kindle make things so dull that one might be tempted to run through a quick scan of the free Hollywood fare provided by the airline.  That’s how I discovered the little gem of Stan and Ollie.  This time around the results possessed considerably less sparkle.  My own interest in Hollywood films has flagged so much that I barely recognized most of the titles, but gave a couple of interesting looking covers a shot, and came up empty.

Escape Room amounts to a low-rent Saw where the people in the death trap dungeon don’t deserve to be there and don’t give you any reason to root for their survival.  It’s a fun puzzler let down by the presence of a vacuous leading lady, an obvious “surprise” reveal, and a rushed ending that sets up a too-obvious sequel.

The latest Mark Walburg empty action movie, Mile 22, really wants to be a smart boy.  The action sequences are great.  The simple escort mission has defined stakes and enough little twists to keep things interesting.  It’s let down a little by a face-heel turn at the end that feels a little cheap given the heavy-handed red herrings blasted through the film, and the lack of any real clues along the way.  But it’s a Wahlburg movie – no one goes into one of those looking for an intellectual challenge.

Which leads to the biggest annoyance of the film – Wahlburg plays a dumb person’s idea of a smart person.  That’s his entire personality.  His character is a super genius, you see, and the film-makers show us this in two ways.  One, he completes “world’s hardest jigsaw puzzles”.  Two, he constantly pauses in the middle of conversations to go off on bizarre rants about…stuff.  In most cases, he just explains things that everyone in the room already knows in a very convoluted way.  He snaps a rubber band on his wrist to keep himself focused, because as a smart person, he needs the reminder.  Otherwise, his attention tends to drift away into his own thoughts even in the middle of public firefights against teams of black clad assassins.

I can’t provide a full review Into the Spider-Verse given that I bailed out when Peter Parker got ganked like a chump twenty minutes into the film.  What makes Spiderman is not his powers or his costume – it’s the character.  Remove the character, and you’ve removed the heart and soul of Spiderman.  It’s a bait and switch, which we all know is a con.

There was a fourth film in there somewhere – it was a long flight – but I can’t even remember what it was, it was that forgettable.

So…yeah.  Not good.  At least I managed to finish the excellent Soda Pop Soldier and Pop Kult Warlord.  The latter of which features an ending as abrupt as any Neal Stephenson book.