Look upon the works of the Futurians ye mighty, and despair. 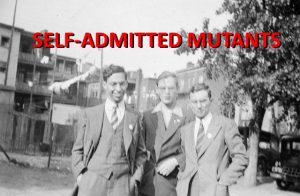 While looking up links for further reading on how smoking post-Pulp sci-fi gave America’s literary scene cancer, I came across this stunning admission that the Campbellian era laid the foundations for the current dismal state of mainstream publishing.

It’s from an article by the LA Review of Books that I won’t link to because Archive.is isn’t working and we adhere to the rule of No Clicks For Commies here at Chateau Mollison.

After a lot of faffing about criticizing the Futurians (a small clique of 1940s NYC outright Communists and their enablers) while claiming the legacy of these pale, stale males, the author of the piece gets to the heart of what literature does.  In stark terms he lays out why the battle for the heart and soul of science-fiction is a critical node in the battle not just for the heart and soul of America, but for the well-being of all mankind.

We are facing a similar crisis to the one the Futurians faced. What kind of SFF do we want? What will it do for the world? How will it imagine better realities, possibilities, lives? Who will it imagine these for? What problematic inheritance from the genre’s lengthy history will it improve upon? Will it seek new ways to topple heteropatriarchy? Will it recast or destroy old tropes to decolonize them? Will it improve upon the representation of those long marginalized, some of whom still have yet to hear their voice in the genre? Will it become something truly transformative?

At the base of all of these questions, we might ask the following in the tradition of the Futurians: How can we make SFF into a utopian technology that will reshape the horizon of the present and make possible the worlds we hope to inhabit?

Great questions, but they really aren’t going to like the answers.  Because the Church of Modernity cannot build and cannot create, it can only mutate and leech and consume and poison.  We still have a chance to keep sci-fi from going full Venezuela, and promising signs aren’t just on the horizon, they are right here in front of us.

That right there is the cover to a best selling novel of Muscular Christian fiction, what Razorfist himself has dubbed Cruci-fiction, and it’s not just a fun read – it’s a best seller.

To save a world…he must rely on God.

After years of fighting for justice with his deadly nanotech, Templar Drin abandons his post, crash landing on a desert world controlled by a tyrannical alien empire. Its inhabitants are forced into slavery, broken where a once-proud race cultivated its lands.

The Force might be female, but the future belongs to God.  The Futurians and their mutated offspring have had their day, but their blood has been spent.  They have nothing to offer but bitter grievances and deconstructions of the wonders of the world.  They have given their children to Moloch, and now flail about looking for a way to pass their devolved memetics down to the next generation, and we men of God refuse to feed our children into their fires.  We have stories from the old cycles – uplifting and heroic and deep and constructive.  We do not profess the truth that we have lived but The Truth, and in the spiritual desert of the Futurians’ making, we are finding an audience thirsty for the waters of life.

Come on in, friends.  The water is fine.