It isn’t working and they know it. 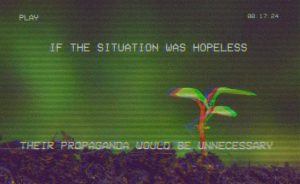 It’s gotten so bad out there that you’re even seeing NormiCons calling for Americans to turn their backs on the foreign movies churned out by Hollywood.  They’re calling for more films by conservative film-makers for conservative movie goers.  Likewise with Marvel comics, Netflix shows (have you cancelled your subscription yet?), and a host of others.

Mind you, they are still stuck in the enemy’s frame of reference.  They won’t actively search the new crop of creatives for current projects already in the works.  Instead, they want a few new Mel Gibson’s to spring fully formed from the forehead of the MGM lion.  That’s not a reasonable or realistic hope, but it’s a start.  The scales are starting to fall from their eyes, and the bottom up cultural flow away from globalism and toward Americanism is happening whether they like it or not.

Because we’re better than that, here’s a couple quick links to projects succeeding on their own merits, by men laboring in the trenches, without help from the boys with the megaphone too big to share with the little guys:

Truly, our cup runneth over.  Every black pill that you see contains a white kernel of truth that should remind you of the increasing desperation of Team Locust.  Three short years ago, they thought that had us beat, that their final victory was at hand, and now they have to resort to ever more brazen stunts to maintain the illusion of control.

They can write as many fascists out of their books that they want – their monopoly is at an end.  We have our alternatives.  Do your part to make them successful despite the deafening silence by the whiners of media’s designated political Washington Generals.