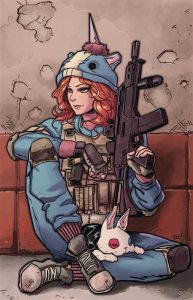 You can’t really blame Marvel for trying to build a new line-up of superheroes to replace the old cohort.  Everyone loves Nick Fury and Cap and Tony Peteyand , but they’ve suffered through fifty full years of stories.  They are also deeply tied to thier origins on the battlefields of WWII and the labs and streets of the 1960s.  Despite retcons and recasting, they still feel like holdovers from a time that has passed.

Marvel’s (and to a lesser extent DC’s) big mistake was turning to the millennials for salvation.  In thier pursuit of young eyeballs, they placed thier trust in young creators.  Inexperienced, untested, and lacking in wisdom, these creatives were thrust into positions where they couldn’t hope to succeed.

This made economic sense. Targeting new IP toward the twenty somethings, if successful, would lock fans in for another fifty years.  Kids unfettered by familial obligations, long history with the characters they were hired to write, and lacking any hard-won beliefs of thier own were ripe for exploitation.  The editors could easily strong-arm them into writing Boomer mind-set tales from a modern-age perspective.  And thus the holocaustianity of old was given a go-grrl facelift.

And the fans wandered away.

Contrast that experience with the runaway success of new characters in the Indy scene.

The PTSD that drives Rags doesn’t feel like it sprang from a reskinned victorious Western Front soldier. Instead, hers is the trauma of a soldier who suffered through the pointless and endlessly slow defeat of an Empire occupying an intractable desert land.  That’s a perfect fit for a post-apoc zombie tale.  The parallels are striking, and writing that tale requires a talent with enough years under the belt to understand the nature of both the conflict and the characters who barely survive it.

Or contrast the X-Men with the Alt*Hero line.  The former’s battles reflect the mindset of an age whose day has passed.  Despite a few fresh faces and b-plots turned woke for the sake of woke, they still fight the fight of a hybrid cold war/civil rights era allegory.  The latter’s focus on the fight between the globalists powerbrokers and the omninationalist resistance reflects the world we see when we look out the window. 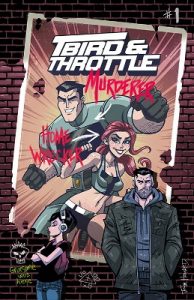 The stark contrast between the gonzo fights with the pathos of Throttle’s struggle to connect with his daughter after being abandoned by his selfish and liberated wife seen in T-Bird and Throttle.  The unironic and sincere romance, the charming failures of the heroine, and the very real risks of secret identities explored by Flying Sparks.  The innocent adventure of Black Hops.

These are the stories of a generation young enough to have stories to get off thier chests, but long enough to know how to tell them well.

The old guard are ossified and stale. Even the new paint job and billion dollar ad campaigns can’t hide the rust spots and failing engine.

The Indy scene has more than just old ideas and a simmering anger at the world they have inherited.  They are free from the shackles of an established canon.  They hold memories of a time when educators worked to inspire hope rather than resentment.  They have had the time to hone their craft.  And the results have been a blast of fresh air inside the antiseptic hospice of the comics industry.

Read them.  And if you already are, note well why and how they resonate where the mainstream comics feel so empty and hollow.  They are the works of today, not yesterday and not some clownish and impossible future.