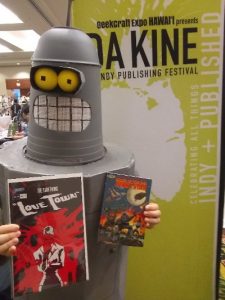 Regular readers know that I’m a big fan of the ‘buy local’ movement. It helps shovel money away from Dinosaur publishers and towards the next generation of independent creators. Me and my lil Bender hit up a small kine geek fest a few weeks ago, and one of the little treasures we found was an urban fantasy comic book called “Love Town”.

In fact, they had a whole quarter of the dealer room dedicated to Indy Publishing, which was a nice touch.  May have to pick up some author copies of my own works and give personal sales a shot some time. 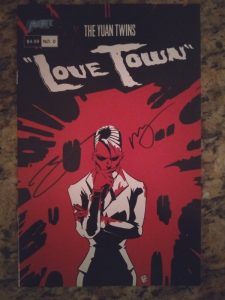 The Yuan Twins were live on-site hocking their wares – always a plus – and they recommended grabbing the Issue Zero prologue.  Unfortunately for me, “Love Town” features two things that just don’t appeal.  Urban fantasy.  Anti-hero.

I’m a massive Glen Cook fanboy, and just found his McGarret PI series uninteresting.  That’s the series with the Adjective Metal Noun titles.  A fine gumshoe noir series, something about the combination of those two genres just doesn’t click with me.  Unless the author firmly ground the action in some sort of gritty system, the easy out of magic kills the mystery for me.

Likewise with “Love Town”. The gal on the cover is -spoilers- a vampire.  I can take my heroes flawed, but murderous blood sucking demon is a bridge too far.  The art is nice – the near monochrome black and white with one shade of gray works well, and the Yuan Twins know how to paint with shadows. 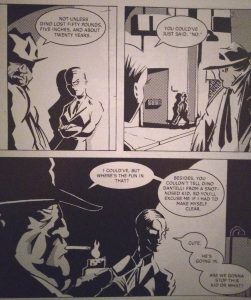 The dialog is suitable snappy, and the small little mysteries that lead up to the big mysterious cliffhanger keep the reader engaged from starting page to back cover.  It’s well written for what it is, it just isn’t for me.

If you like your grimdark extra grim and extra dark, you might like it.  It’s a no for me, but in this case that’s just a matter of taste.