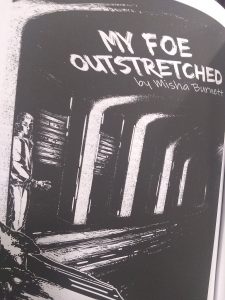 The always reliable Misha Burnett tosses the reader into a two man fight to the death in an arena that makes modem day San Fransisco look like as clean as an operating theater.  StoryHack Four continues to stroke my ego by placing my work alongside greats like Misha.

He’s good, this Misha.  I’ve said it before, and let heme add that he single handedly saved me from throwing the whole New Wave sci-fi baby out with the rest of the SocJus bathwater.  His deft touch with character studies and nuanced approach to the introspective aspects of genre fiction has earned him the respect of a lot of hard-nosed blood and guys writers.And

And then he sits down and bangs out My Foe Outstretched, a vivid duel set in a dystopia where all that matters is revenge and survival.  It’s a straightforward trial by combat between two men with a grudge. Somehow Misha pulls off a grimdark ending that satisfies even Virtue hounds like myself.