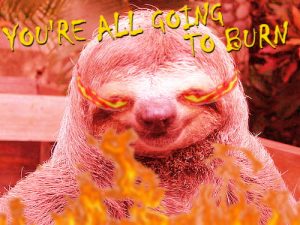 Once upon a time nature documentaries were designed to inform and inspire.  They brought our collective attention to the wonders and mysteries of this incredible world that God has given us to hold in stewardship for future generations.  As the father of a young daughter who believes that she will one day make a living rescuing animals, we’ve tried to watch a few documentaries of a more recent vintage.

Despite all of the advancements in technology they are universally terrible.  The gorgeous camerawork and unprecedented access to ocean depths, hidden jungles, and once inaccessible cave systems have all been pressed into the service not of the collective children of man, but of the forces of suck.  Globohomo has claimed nature documentaries as trojan horses for their secular-religious propaganda, and has now filled them with constant refrains of death and doom should we not all drape ourselves with the chains of slavery.

The few that we’ve slogged through never miss a chance to warn the viewer that global warming means the wonders you see are going to burn.  It is an endless litany of “habitat loss means all these creatures will die” and “rising temperatures are destroying this fragile system”.  Even when rising temperatures actually improve a habitat the narrator solemnly intones, “but this is only a short term benefit that ultimately will doom these wonderful creatures to extinction” for reasons that are never fully elucidated.

The underlying message is always the same:

It’s the usual death-eater view that you see in every other form of entertainment, and as with most other forms of entertainment, they have ripped the mask clean off.  What once was confined to the background and subtle shading is now presented in full frontal exposure without a trace or shred of camouflage.  It’s repetitious and clumsy and readily apparent to even a cursory analysis.  The contrast between the elevation of the technical aspects of the film making process with the utterly incompetent narrative writing is jarring.  It’s the same process we saw with the CNNBCBSPN media monopoly, now etched into what could be a useful tool for real improvements in our lives – but then, improvements in our lives don’t pay the globohomo bills, so we can’t have that.

As usual, there are a lot of other options out there.  You can still find grainy old documentaries that don’t jam a spoonful of globohomo poison into every shot.  Even better, we’ve found that reality programming has inadvertently made sport fishing and hunting a safe refuge for the more conservation minded among us. 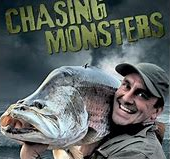 Our current favorite is Monster Fish starring Cyril Chauquet, an oddly accented French Canadian, who bops around the world trying to catch massive fish.  Primarily a sport fishing show, it features enough actual biology and a touch of the travelogue to create something that straddles the line between sport and nature documentary.  Sometimes he goes full modern, sometimes he goes full trad, but however he does it, he makes a day spent outwitting fish exciting and informative without all the preachiness that you get from the “respectable scientific community”.  He also does it with a charm and charisma that most fishing shows lack.  Given his focus on entertainment for the masses rather than information for fisherman, Cyril manages to craft a show that is both fun and informative.

There are also a host of smaller shows that focus on efforts to save wild dogs and cats and other animals from the hazards presented by urban and suburban life.  Often filmed on a shoestring budget and often featuring volunteers or barely-paid staffers, these shows typically provide information on follow up care, and therefore slide into the realm of medical drama – but with cute animals that tug on even a jaded guy’s heartstrings.  More importantly, they entertainment while giving viewers specific information on what steps they can take to make their neighborhoods a safer place for everyone.  They show how rewarding actual conservation can be, and they show the actual positive effects of serving as a good steward for God’s green earth.  Those are things you never see in the Serious Fare.

We live in strange days where gorgeous cinematography and high production values serve the lie, and where low budget or grassroots efforts serve the truth.  That’s as true for nature documentaries as it is for blockbuster superhero films.