Late last week some pretty little TikTok dish made headlines by pointing out that it’s hard to accidentally get pregnant or catch a sexually transmitted disease if you don’t actually have sex.  The Wuvs Da Science crowd flipped their lids because they don’t Wuv Da Science when it comes to epidemiology, which always takes a backseat to political considerations.  If you doubt me, check out all the laws that expressly forbid insurance companies from factoring epidemiology into their actuarial tables when it comes to diseases of the…shall we say brother on brother variety. 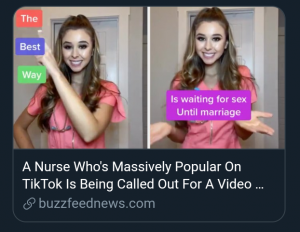 This is not good for the peddlers of modern thought.  It is a direct shot amidships and any popular voice reminding the world that the only true safe sex is that practiced within a monogamous marriage (preferably one recognized by the Church) and that leaves the couple open to procreation.  Encouraging people to rein in their libidos – in fact, to deny themselves any moment of transient pleasure at all – risks starting a cascade effect that might lead to such dangers as eating less, going outside, lifting weights, reading old books, or thinking for oneself.  Even arguing about whether practicing a little self-control does a body good works against the greater goal of trapping people into the hedonistic death-spiral.

A counter had to be developed.  After a brief and perfunctory two-minute against against Nurse Cutiepie, the modernist zeitgeist hit upon an rather interesting solution.  Rather than confront this hatefact head-on, they launched an effort to push it to the figurative backpage where people would stop noticing it.  That would be a solid victory on the war on noticing.

Stick a pin in that for a second, before we move on to what happened, we should be clear about what didn’t necessarily happen.  There didn’t have to be a smoke-filled room were shadowy puppet-masters pulled strings to make the following events occur.  There didn’t have to be a private chat where a small cabal of key influencers gathered to formulate and coordinate a response to Nurse CutiePie.   Although those things are possible, and we have records of them happening in the past, they are not a requirement for the sort of conversation shifting process that occurred here.

Everybody in on the Safe Sex scam already knows that abstinence is their achilles heel.  They ravage even the slightest hint of that strategy with fake studies and shifting measures of success.  They all hate it, and they all want to silence the idea forever.  So when the chance arrives to talk about something else, when the chance comes to countersignal one authoritative voice with another, they’ll grab onto that chance with both hands.  Hell, they will manufacture that voice if they have to. 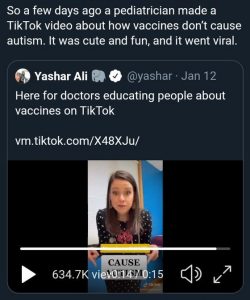 Tyranny is now a woke six smarming your face, forever.

Look at the jangling keys, kiddos.  Pay no attention to the nurse laying down the hatefacts.  We have this other discussion that we prefer, because it rests on ground we mistakenly think we control.

The antivaxxers always punch well above their weight.  They are a strong counter-balance to the Nanny State.  They are always in a low-grade simmer, and they always rise to meet any Nanny State swarm with a counter-swarm of their own.  That makes them the perfect patsy for deflecting interest away from medical facts that get in the way of the GloboHomo agenda.  A bit of empty sloganeering waved their way is like a red cape to a charging bull.  They launch themselves at you, thus providing a chance to steer the conversation away from any challenge to the march toward the progressive agenda’s next pyramid of skulls.

It’s easy to do, and this sort of propagandistic monkeying with the public conversation is now old hat to the influencers.  First a social media site gooses an algorithm or two to force a bland dance-vid jump into the “trending” category.  Then the clickbait merchants have grist for their fake news mill about this hot new trend, which dumps the scolding into the anti-vaxxer’s laps, and they never refuse to dance when they hear that music.  Now the fake news gets more grist by writing about the backlash of the anit-vaxxers who pounced on the first articles.  And welcome to the positive feedback loop of modern discourse.

You don’t need a conspiracy when you have a woke culture.  Everybody already knows the steps to the dance.  All you need to do is change the tune.

There are a lot of interesting facets of this tempest in a beaker.  For example, a pediatrician makes good money off of peddling vaccines while a nurse has no financial interest in promoting abstinence.  From a cui bono analysis alone, Miss Six loses this one.

But my favorite angle has to be the meta-analysis.  That’s the part where we notice that thanks to the Progressives we are marching forward into an era where debates on medical science and on public health policy will be conducted by dancing nurses pointing at colored shapes.

Whatever chastisement God sends our way, we deserve it.