Yes, I am reviewing a forty year old children’s film.

The older brother from Land of the Lost leads a complicated life.  He lives in a high crime area – Los Angeles, go figure – and spends so much time working on a secret home security project that he neglects his day job working for the security corporation run by Mister Drummond from Diff’rent Strokes.  He loses his job as a result, which is rough because he and his fiance, Valerie Bertinelli, were about to tell Mister Drummond – her father, mind you – of their recent engagement.  To make matters worse, Mister Drummond’s company is almost bankrupt thanks in part to corporate espionage paid for by a rival company owned by Thurston Howell.  Said espionage includes hiring two inept burglars, Red Buttons and his bullying boss played by a longtime Hollywood character actor named Chuck McCann.  Fortunately, the older brother from Land of the Lost has almost perfected his new invention, a cyber-dog named CHOMPS (Computerized HOMe Protection System). 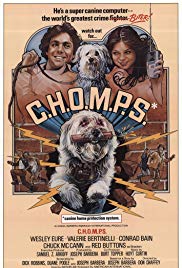 This thing didn’t age well.  It’s produced by Joseph Barbera – the second half of the Hanna-Barbera that you know – and it shows.  The comedy is over the top, cheesy, and squarely aimed at the six-year old set.  The dastardly spies and crooked crooks run schemes simple enough for little ones to follow.  They cheaped out on the soundtrack, with the motif for CHOMPS, a little 12-bar ditty, sounding every time the dog appears on screen.  The orchestral music also has that funky ‘tail end of disco’ sound mixed in.  Cartoonish sound effects, the same ones you heard in every Hanna-Barbera show, are present in full force.

My kid didn’t care about any of it.  It’s a cute dog beating up grown men for ninety minutes – she loved it.

As a time capsule, it’s great.

One thing that struck out to me was how woke the casting was all the way back in 1979.  All of the crooks are white guys, just like you see on most police procedural these days of the 13/50 meme.  The two black guys who appear are a uniformed cop and a smart reporter.  Chalk this one up as a data point suggesting that the woke and the based are both out to lunch on what casting used to be like compared to today.

So should you watch it?  Show it to your kids?

But I enjoyed it.