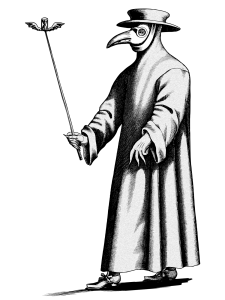 People in an industry I don’t really trust tell me that people in a country I don’t fully trust are reporting to a global organization I completely don’t trust a story that I’m supposed to take very seriously.

I have already seen politicians I don’t trust explain that science I don’t trust offers a political solution I don’t trust to prevent the next one.  I give it better than even odds that an industry I don’t trust has a means of protecting me from this latest and greatest threat to all humanity.

Now, I’m not saying that the Corona Virus isn’t a problem here, but if it is a problem, then it’s a safe bet that all of the people who are responsible for teaching me not to trust any of the entities mentioned above will bear a much greater burden for my lackadaisical response in the face of the Horseman of pestilence.  They are a child crying wolf for the tenth time.  I’m rolling over and going back to sleep, and if half the village gets eaten…well, I’ve spent enough nights falling for his tricks.  At least this time I’ll save myself a few wrinkles and live a more peaceful life.