“What does the clown do when the whole world is a carnival? How do you make someone laugh when the entire world is a joke? That’s the world we’re living in.”

Jonathan Pageau, ladies and gentlemen, asking the questions that you never knew you were burning to have answered.  Here’s the full lecture, which touches on a lot of symbology and modernism and philosophy and strategies for pushing back against the Cancer Culture.

For those not interested in a one hour lecture, allow me to summarize briefly before getting to my observation. Pageau discusses how the role of a Fool is to invert the natural order, and how that can play a vital role in reminding everyone of the dangers of abandoning tradition, even and perhaps especially when we don’t understand how those traditions came to be. There’s a lot more to it, but one aspect he delves into is that the Fool serves as a constant wildcard that can overturn the order, and then because it is in his nature to turn things over, he can serve as an instrument that flips things from the absurd back into the natural order.

Which brings us to today, when a clown like Ricky Gervais abandons jokes to accuse a room full of powerful cultural titans of being accessories to rape, pedophilia, slavery, and murder.

Or when, and this is one thing Pageau didn’t touch on, our cultural masters force upon us unfunny stand-up comedians such as Amy Schumer or that one broad with a Netflix special whose whole routine consisted of angry lectures about her rape. These are not funny people, and we are told that they are comediennes. That’s an inversion right there.

They aren’t that smart. They have other reasons for foisting these unfunny funnymen upon us. In the case of Senator Charles Schumer’s niece, it’s pretty obvious. They are acting out of a preservation instinct rather than pure cunning, but the effect is the same. Make the fool a mouthpiece for the status quo, and you can prevent an inversion that would do you harm.

Which also explains why the culture of Silicon Valley hates the last of the truly funny merry pranksters.  Why they are desperate to classify the world’s current most notorious Fool as a crimethinker whose voice must be tamed, and whose mouth must be muzzled.  There is danger inherent in speaking the truth about clown world to those who run it.  They hide behind the word “hate”, because they fear the truth.

But the Fool will not be silenced. 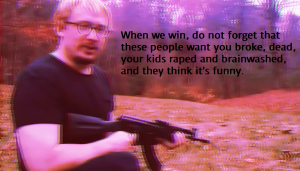 When the inversion occurs, when we win, we’ll need to spare a thought for directing the Fools who target the natural order down more productive paths than the Fools of our fathers.