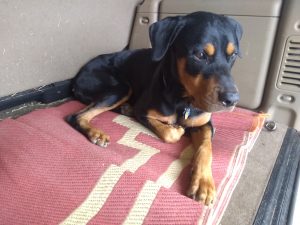 She doesn’t realize that the more time I spend around rugged men, the more I appreciate the big damn dog she insisted we get.  She might not appreciate the way their awful example leads me to make decidedly un-PC pronouncements about the one gender in this world*.  Or my renewed dedication to working out on the regular.  Or the beard oil expense, which she considers odd because I don’t have a beard.  Or my tendency to run Game on her, and not always ironically, to cheer her up.  That’s all obvious. 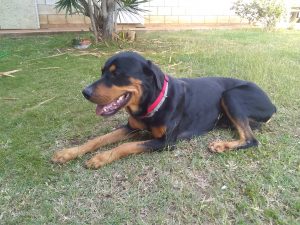 They have also very slowly and gradually led me to appreciate why a mutual supporting dog fits a man better than a fiercely independent and emotionally distant cat.  This house already has a full quota of fierce independence and emotional distance thanks to my living in it.  Why would I want a cat infringing on my schtick?

He’s a Rottweiler-Doberman mix with maybe a touch of mastiff or dane thrown in for good measure.  He clocks in at nearly 90 pounds of galumphing muscle.  A rescue dog – we only ever adopt animals from rescue organizations – he was two years old when we got him and already mostly well-trained.  We just needed to get him to understand our own peccadillos and convince him that there was no profit to be found in haring off after and trying to eat the various smaller dogs we encounter at the park and on the beach. He has a strong retriever instinct, and a lot of fancy-pants dog owners make the mistake of thinking its cute that their cat-sized creature thinks they are a lot bigger than they really are.

Like his owner, he might not be the smartest dog in the pack, but he’s smart enough to be dangerous and as handsome as a hawk on the wing.  He’s a big boy, and they don’t typically last long as dog lives go, but we’ll treasure his company as long as possible.

*To whit: There is really only one gender.  Men.  The rest is just property.