This can’t go on forever.  As we approach the tipping point, the zeitgeist has shifted from thinking about the next Big Crunch as solely the realm of the paranoid and the conspiracy addled.  Many culture warriors seem to relish the idea of a big reset as a means of culling humanity’s herd – a simple and relatively fast way of escaping from clown world via a retreat into a world red in tooth and claw.

Let us look at one aspect of the Big Crunch that is seldom discussed.

And then we will look at something even more chilling.

If you are looking forward to a Crunch big enough to cause a forcible debt-jubilee, consider that the sort of crisis that results in con-artist bankers get their just desserts would also lead to the global economy grinding to a stop.  Factories will shutter while waiting for supplies to arrive, or just to wait out the uncertainty until the replacement global system can be drafted, agreed upon, and implemented.  Everything will grind to a halt.

And that includes the sorts of things that we take for granted here in these pre-collapse days.  Everyone talks about what it will mean when the wastewater treatment plants turn out the lights.  Flush toilets were fun while they lasted.  Fewer understand that most major cities have much larger systems at play.  Like the one that runs the Chicago River.

Chicago was built on a swamp.  Rumor has it the name Chicago comes from an indian word that means “onion field”, because the place smelled so bad.  De white debbils drained the swamp, built a city, and ran into a little sanitation problem when they discovered that the river they crap in flows out into the lake that they drink from.  That would be the river they famously dye green every Saint Patrick’s Day.  To fix that, they built canals that feed water from the lake (and their waste) in the opposite direction – toward southern Illinois where nobody lives but those too stupid to move to the City.  (Their thoughts, not mine.)  All of the infrastructure required to manage those water levels takes time, effort, and money.

When Loo goes Aboogin’, do you really think those systems will remain in place?  If the debt-bubble bursts fast enough and hard enough that food chain supplies are interrupted, you can bet your last can of creamed corn that these systems will be interrupted as well.

Will the engineers who keep the system repaired, and who tweak the water levels to keep the flow going in the right direction, and who get paid by the government – will those guys keep doing what they need to do to keep Chicago from being reclaimed by the swamp?  Every city in America has projects like this.  Dewatering pumps for New Orleans.  Levees for Saint Louis.  You get the idea.

When the men who run those systems are too busy fighting off feral hordes of mutants, or growing backyard gardens to stave off starvation, to do their jobs, things are going to get a lot more complicated than most people understand.

Because the Chicago River Works are the easy to see and easy to understand one.  When the water rises, you just move to higher ground.  But what do you do when the water doesn’t change in an easily identifiable way?  When the well water you drink suddenly sees a spike of TCE or methyl-ethyl-death? 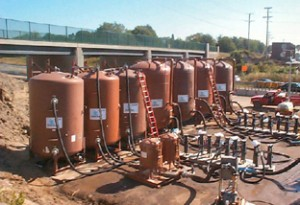 What you are looking at here is a pump-and-treat system for a contaminated groundwater site.  The bad water gets pumped to the surface, run through the big tanks filled with carbon filters, then re-injected into the ground to continue on its merry way without the load of methyl-ethyl-death.  Stripped clean, it can be pumped by homes or municipalities for use in the usual variety of ways.

Building these takes time and money.  Running them takes a lot of time and a lot of money.  Years of time – in some cases they are designed to run full time indefinitely because the source of the contamination is literally impossible to clean up.  And the downstream effects of letting the contaminants flow through the area are deadly.

There are a lot of these systems out there.  In every town.  Every major city has a project that dwarfs the one you see in the above picture.  These projects run on the same power grid as your home.  Or require liquid hydrocarbons delivered from the other side of the world at cheap prices. 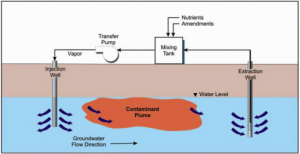 Now paint the same picture as the Chicago River disaster, but performed in silence.  A thousand little poison pills floating along the substrate, waiting to infect the unwary.

The Boogaloo holds a lot of surprises for a lot of people who only think they have it all figured out.  Sure, the preppers might have enough personal filtration devices to weather the storm, but what happens a decade later when they set about rebuilding and the cancer rates skyrocket?  When infertility stalks the land?

Yeah.  Think twice about joining the collapsitarians, because a full crunch will be so much worse than you can possibly imagine.

So even if it means the bankers escape the lampposts one more time, pray for peace and a very soft landing.