Skip to content
Confession time: My social media presence has largely shifted over to the dreaded tweet machine and my fiction writing blog.  Funnily enough, I ran into Chicago Wizard over there, too!  Like minds gravitate toward each other and all that.  Due to the usual vagaries of modern political discourse, my tweets auto drlete on the regular.  Lots of weirdos out there mistake off the cuff banter for uron clad professions of deep faith.  The downside to that is the live-tweeting of wargames leads to an ephemeral record of games played.
Here now is a more permanent record of a game of En Garde! played with my now seven year old in which the King’s Guards bump into a contigent of Richelieu’s guards s on the way to Paris.  Both proud forces refuse to yield to the other and soon swords are flashing and blood spilled upon the dusty roads of rural France.
The basic victory conditions were to get across the bridge to the north the firstest with the mostest.

The King’s guards split up, sending three men around to the right, while the Cardinal’s men did the same.  They also sent a man around the back of the church to come up behind any lingerers. 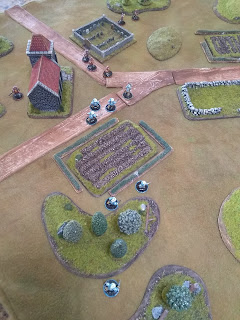 The first set of duels at the crossroads sprung another King’s Man toward the bridge, just visible at the top of the photo.  The duel in the center has begun with the King’s man, a mook, fighting defensively against a superior foe who had put both his actions into attack. 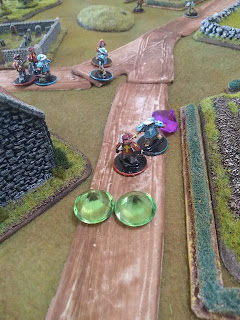 First blood sees the Cardinal’s leader (with the yellow fringe) putting down his foe. 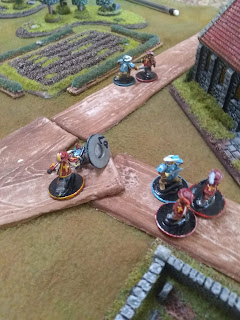 The fighting rages at the Church with three King’s Men falling, but buying time for their comrades to proceed with all due haste toward the bridge.﻿ 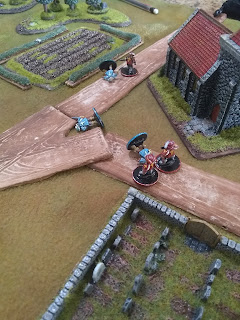 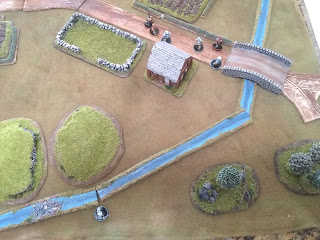 Here the Captain remains behind, triple-teamed and alone, to ensure that a few of his men can cross the bridge before any of the Cardinal’s men do. 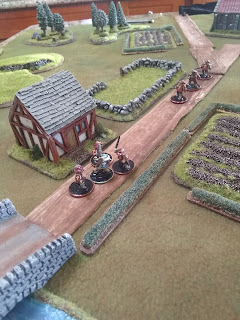 Here we see the first two figures to escape, including that far flanker who did nothing but sprint the whole time, before the first of the Cardinal’s Guards could get off table. 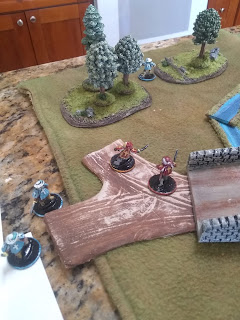 Based on a quick twitter poll, the game was a marginal victory for those loyal to the King. It was a close run affair, but a lot of fun.