Skip to content
Broke out this classic print-and-play solo wargame for a little playing with myself in a way that won’t make me blind or lower my T, and holy cats was it a blast!  My daughter is my good luck charm, as she rolls like a beast.
If you’ve never played, this is one of the best solo adventure games ever produced.  It’s a bit of a rogue-like in analog form, and thanks to the reliance on sheer dumb luck it is a hard game to win.  You start at the northern end of the map and have seven weeks to get your hands on 500gp and get back to the north.  You’ve got to juggle food, money, and not get lost.  Thanks to the way the terrain effects work, each type of terrain has 36 different possible encounters, with sub-tables that blow the possibilities up into the hundreds.  You can get lost, starve, find followers, get mugged, explore ruins, catch a mount, and all sorts of fun stuff. 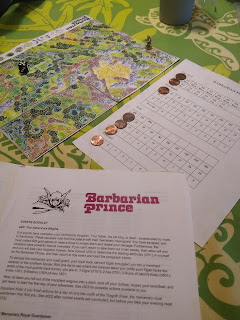 A couple of settlements offer a chance to appeal to powerful allies for help, though this can be risky as these potential allies are just as likely to threw you in a dungeon.  In a dozen plays I’ve never come close to winning.

This time around, we made our way for a town that chased us out, then down to Huldra Castle where the Baron gave us 50gp and an escort to get the heck out of his countryside.  That’s all it says, and in the best game fashion, it’s up to you to decide what that means.  We decided that it was the Baron’s daughter who took a shine to our brooding barbarian and the Baron paid us off and gave us the boot in a polite, yet firm manner. 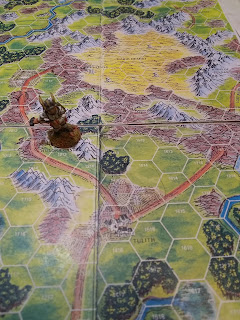 We decided to head north and see if one of the temples would be more amenable.  Along the way we met a swordsman who helped us kill a dragon – and lost his life in the fracas. 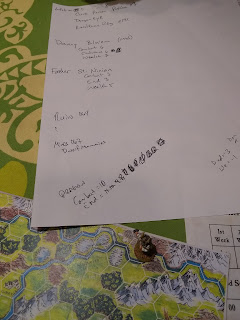 He will long be remembered in the annals of our rulership, as the 200gp we found in the dragon’s horde put us halfway to victory, and gave us the precious Eye of the Dragon. 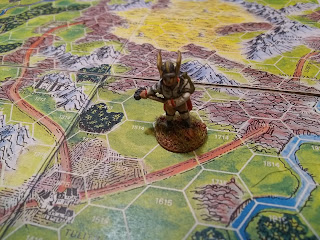 Here’s where our luck really turned for the better.  The priests at the Temple of Zhor are fickle.  You roll 2d6 for their reaction, and need something like a 9 or better to gain favor.  However, if you roll and 8 – and you have the Eye of the Dragon – which we did and we did, the High Priest showers you with aid.  They gave us 300gp for it, and we thought we had it made in the shade.  All we had to do was move four hexes north, get across that river, and we were home free and ready to pay off the mercs and ascend to our throne! 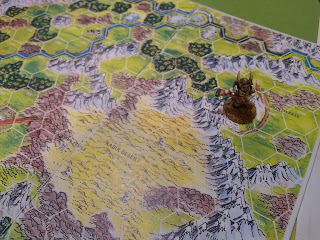 And then we got lost.  And lost.  AND LOST.  We spent two weeks on the south bank of the river searching for a way to cross.  Luckily our hunting forays were successful, because we had enough food to share with a priest who happened along.  He showed us a secret ford the next day.  No joke, that’s how the dice came up.  Two weeks of being lost, meeting a priest and befriending him, then crossing the river the next day.  It’s the kind of dice-birthed serendipity you just can’t make up, but that make up the best tales.

So, with 500+gp in our belts, we crossed the river, made our way to town…and then couldn’t find out where to read the victory conditions.  It’s pretty vague as to whether you win by crossing the river or getting to the nearest town or what.  We figured getting across the river was enough. Any of the Usurpers Guards that met us would be more than happy to take our 500gp and escort us back to him for some well-paid justice. 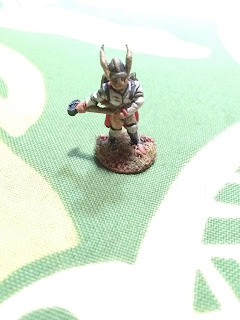 Dang, it feels good to finally notch a victory on this game.  And all it took was world-wide plague of Korean Death Fars.  Take that, CoronaChan!﻿
2 Comments
Making Adventure Fiction Great Again
Subscribe today to be first to hear about my new release, plus receive a copy of a free fantasy novella!
Follow