Welp. We played it. The $40,000 poke in the eye of the sniveling schoolmarms of modern society. 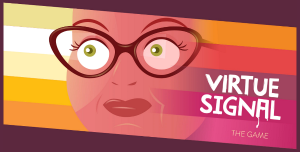 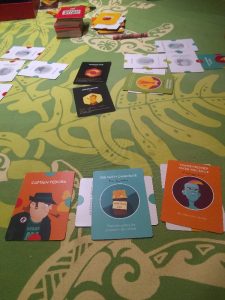 It’s a coalition building card game reminiscent of SJ Games’ Illuminati.  You play NPC cards off your special character card in the hopes of building a 15-member gang of influencers.

You stop other players by blocking growth using Microagression cards that can only be removed by playing a Virtue Signal card of the same color.  The black cards you see are Plots, and they limit play in different ways.

And here’s where the game turned into a bit of a slog.  Most of the decision making comes from how to block actions, with insufficient ways of freeing up action.  The mix of Microaggressions and Virtue Signals, the mix of special abilites and Plots, ground the mid-game portion of our playthrough to a near stand-still. 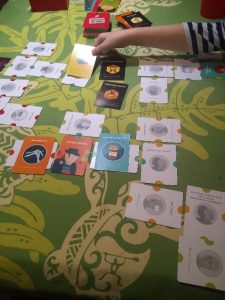 Kind of fitting given the source material, but not what you want for an engaging gameplay.  It reminded me of those games of Cosmic Encounter when everybody had defensive abilities and nobody could crack anybody else’s home systems.  Eventually, I played a series of “discard your hand” cards to force a reset on everybody (myself included) and that broke the logjam.

Within two turns, enough NPCs had been slapped down to bring the game to a merciful end.

Now, maybe this was just an odd shuffle.  Maybe we need to work on a better special power selection.  Whatever the reason, I was left unimpressed with the game play.  The art is cute, but once the game engages, it turns into meaningless mush.  They are just words, and they defang the very real threat posed by people like the Fedora Tippers.  Once you get this thing on the table, you really wonder what all the fuss was about.

We’ll give it a few more shots and report back.  It isn’t a bad game per se, it just feels like it needed a little more playtesting.  If you want to prove me wrong, you can get a copy here.