Arthur Miller’s The Crucible is now widely recognized among honest brokers as a flagrant bit of squid ink meant to protect his fellow Death Cultists.  As Miller himself admits, “[The] power to stir fears… was not entirely based on illusion, of course; the paranoid, real or pretended, always secretes its pearl around a grain of fact.” Miller himself practices this, as his blatant bit of propaganda must be based on some shredded remnant of truth.  The smallest fig leaf will suffice to disguise the naked ambitions of those who lust only for power. 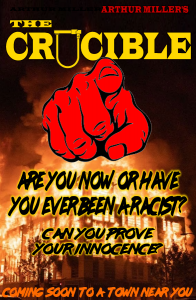 And it is here that even the most blatant propagandist runs into the difficulty of his fig leaf being weaponized against him.  Consider how I removed the specific references to Miller’s own particular place and time from his quote above.  The quote stands – the stirring of fears, the riling up of an otherwise agreeable people like Americans – depends on that tiny bit of truth to take root in a man’s soul.  In his case, Miller dared not admit his desire to turn America away from its Christian underpinnings and down a darker path.  Therefore, he chose to drape his love of Communism in a love of justice.  He demanded that we turn a blind eye toward those who sought the destruction of America, and to do so in the name of our own common decency.

The dirty commie had a point.  One should be exercise great care when tossing around wild accusations that could cause a man to lose his property, his liberty, or his life.

Witch hunts have a nasty habit of turning back on their accusers.

If we lived in an honest society, and not a clownish mockery of one, those paid to analyze the zeitgeist would ask difficult questions.  Questions like, what does “The Crucible” have to say about… well, about the things we just can’t talk about.  Things that, if we talked about them, we would wind up in the dunking chair, staring down at the frigid water, and wondering whether or not to confess to an absurdity to save ourselves the pain, or whether our accusers would take the admission as an justification to burn us at the stake in the public square.

So it’s up to we happy few intellectual guerillas to slide the idea past the censors an hopefully tickle the amygdalas of those few Death Cultists who can be reached.  The struggle is the glory.