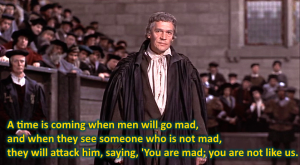 If your soul could use a little chicken soup, give A Man For All Seasons, a watch.  When Robert Bolt used the words All Seasons  in the title, he meant it.  And thoughtful modern viewers will find themselves sympathizing and understanding the plight of Saint Thomas More as he stands up to the maddening crowd and attempts to navigate a path through the treacherous waters of a legal system bent on exacting injustice after injustice.

How much does this film echo our own clownish days in which words mean everything and nothing all at once?  Today, when inversion is the order of the day and the Church founded by Christ creaks under the rotten timbers of the men who run it and sways beneath the winds of a population who hates it, how inspirational are these words?

“If we lived in a State where virtue was profitable, common sense would make us good, and greed would make us saintly. And we’d live like animals or angels in the happy land that /needs/ no heroes. But since in fact we see that avarice, anger, envy, pride, sloth, lust and stupidity commonly profit far beyond humility, chastity, fortitude, justice and thought, and have to choose, to be human at all… why then perhaps we /must/ stand fast a little –even at the risk of being heroes.”
― Saint Thomas More, from Robert Bolt’s A Man for All Seasons

The ending of the film is not a happy one on its face, but we can see in the ending of the story of Saint Thomas More a means of standing up a little more straight, and remaining unbent beneath the pressures of the Death Cult and its adherents in our own tyrannical governments.

Fortify yourself with the solace that our labors are not in vain, and that even the most hopeless of causes are worth fighting for while we yet carry the hope of salvation in our hearts.

It won’t be easy.

But it will be worth it.