Celebrate your independence from authors that hate you, the good, the beautiful, and the true.  You should pick up your copy of The Penultimate Men today, and I’ll tell you why.

For starters, it includes a new Morty and Kyrus story from Schuyler Hernstrom.  If you have read any Hernstrom, you already know his entry is worth the price of admission alone.

In addition to that story, you get Jeffro Johnson’s inimitable break-down of the post-apocalyptic genre, a pair of tales from my own pen, and something you’ve never seen before.

Neal Durando took the straw of a brief game of Gamma World and turned it into literary gold.  Somehow that mad master of tongue and pen put together a poignant series of stories about a two-headed semi-intelligent mutant pig and, my hand to God, made it work in a way that reads like warm butter spread on hot bread.  It is at once sad and hopeful and mysterious and in a just world would be the only story anyone wants to talk about for the next month.  Like a magician, he does things with his narrative that I’ve read three times, and I still can’t figure out how he milks so much pathos out of what should have been a silly throw away concept. 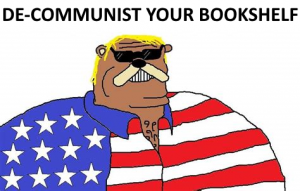 Because unlike most apocalyptic fiction on the market today, the stories in this book do not indulge in the boring and inaccurate and overused cliché of “we were the real monsters”.  To the contrary, these are not stories about the collapse of civilization, but about picking up the pieces left by previous generations and using them rebuilding peace and prosperity for the next generations.  These are tales that echo, as all the best apocalyptic stories do, that first and worst of all apocalypses – mankind’s original fall from the perfect society crafted by God and placed in a garden we call Eden.

Adam and his hungry wife were the original Survivor story.  They built something grand, but something that was only ever an echo of that long lost Eden.  And so the cycle continues as their children reach for the heavens, fall short, and collapse back down to the dust from whence they came.  Even our own efforts to build a utopia on earth, our callbacks to Rome and the Magna Carta, are but an echo of Adam’s struggle to recapture what he lost in this life, knowing that his only chance at finding it lies in the next life.

Just so, these stories.  They are tales of conflict and heroism and a struggle to understand what happened and how to move forward, yes.  But more than that, these are stories of HOPE.  Hope that we might build something better, that we might move closer to God and to heaven.  Hope that our children will not suffer as we do.

Hope amid the ashes of a fallen civilization.

And that’s something that we can all use a little more of these days.

Get your copy here.  More than another Amazon flash in the pan algo-chaser, this is a volume you’ll want to hold in your hands, and to keep around once our own civilization’s light begins to fade.