Skip to content
I’m still hip-deep in a wargaming kick and off the D&D wagon.  But I thought the following might be of interest.  A friend writes:

I searched the PHB and DMG for any mention of having a ranger or druid prevents parties from getting lost. It does say that if there is a guide who knows an area you won’t get lost. Also, such an ability would negate the Cleric 6th level spell “Find the Path”. The high level of “Find the Path” to me indicates that getting lost is indended to be a reall possibiity except for high level parties and even then only if a high level cleric devotes a spell slot to it.

My take would be the DM getting to decide the extent of the player’s knowledge of the area and when the possibility of getting lost kicks in. For example, in the previous games the ranger said during downtime he was exploring the area around the city. Now, the ranger is dead, then presumably the party has lost some of this knowledge. I think we’d still know the way to the lost city and Fluid to his jungle treehouse. But, other areas we presumably are ignorant. 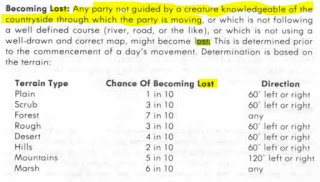 My gut take on this is that any wilderness exploration is analogous to dungeon exploration. You are leaving behind the lands of Law and heading into the lands of Chaos – even if the hills and fens are dotted with huge ruined piles, the land has been reclaimed by the Gods of Entropy, and the normal rules by which Rangers and Druids operate no longer apply. A local guide will be familiar enough with the abnormal rules to guide you through the wilds. And your very presence can tame the wilderness and yoke it to the rule of Law. Over time, once reclaimed, a Ranger will never get lost in such lands.
This, however, requires a permanent presence and that means it’s Stronghold o’clock. If you want to wander more than a few days away from civilization, and you don’t want to blunder into all sorts of misty cul-de-sacs filled with twenty-year sleeps and hags dweomered to appear as elegant sylphs, you’re going to need to build a fort and keep her staffed with reliable Christian souls. Not because their arms will do much good, but because they can protect the decent priest praying the Daily Hours, who will be your chief ward against the creeping doom.
Making Adventure Fiction Great Again
Subscribe today to be first to hear about my new release, plus receive a copy of a free fantasy novella!
Follow