Got a weird one for you.

A film in which Dave builds a cardboard maze in his living room while his girlfriend is gone for the weekend, and then gets stuck inside and needs to be rescued.  The story opens with her disbelief at the mess he made, and her disbelief that he could be stuck inside such a small structure – unlike we who have read the box text, she does not realize that it is bigger on the inside – but she trusts him enough to honor his request not to enter the maze lest she get lost, too.  She finally does enter along with a bunch of hipster friends, and hijinks ensue.

What follows is one of the most creative films that I’ve ever seen.  It’s a comedy-horror-romance that feels like the unholy love child of a low-budget Edgar Wright film and the TV show Community.  (That is a compliment, by the way.)  The film packs a lot of left hooks and sharp zigs when you expect it to zag, and the glee with which it veers away from the standard Hollywood formula delivers a refreshing change of pace…if you can get past a few stumbling blocks. 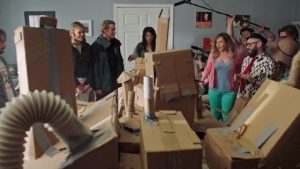 At just three years old,  Dave Made a Maze already feels a little dated thanks to a heavy dose of the hipster influence in the dress and mannerisms of the cast, but don’t let that put you off.  The script owes a lot to the mumble-core genre, too.  With characters behaving more realistically that dramatically and talking AROUND things more than they talk ABOUT them.  Not every big conversation leads you to think that a major shift has happened.  Not every reveal involves a character lowering all of his defenses.  Instead, you get a lot of little moments, small glimpses of the characters that you might get if you spent a couple hours with them over coffee.  It’s a different pace, but given the madcap magical world that the characters are fighting against, the decision to step back a pace really helps balance the flavors.

As just one example, at the start of the film, we have no idea the state of the relationship between the leads.  She just got back from a trip to some unspecified location, and she is rather exasperated at him, but it isn’t clear whether that is a result of long-simmering tensions or just the normal irritation at coming home to find a big cardboard mess filling the living room and your failed artist boyfriend literally buried in his latest unfinished project.  Turns out – no spoiler here – it’s a little bit of both, but this isn’t a Roland Emmerich style film where their relationship is DOOMED and this big crisis is just what they needed to resolve their petty differences.  Nope – they have problems before the film, but they aren’t massive, and they learn enough about each other to help smooth over those problems.

It’s a nice break from the heavy-handed

And…look, there are a lot more surprises in this film than you’ll find in a dozen blockbusters.  I can’t tell you what they are.  You’re just going to have to experience them for yourself.