Matt Hartley’s Riot!  Revolting People from Watt Tyler to Watts is an interesting wargame.  It’s a truly fourth-generational game in which mobs of outgunned citizens try to effect change against a far better armed, but outnumbered, army of the ruling class.

Enjoy some eye candy while I pontificate.  Alert readers will notice that I’ve put a grid over the tops of these buildings.  In Riot! the mobs can loot and burn structures, but each counter only affects one square inch at a time.  Mine are a little less regular than the rules stipulate, but they’ll work just fine. 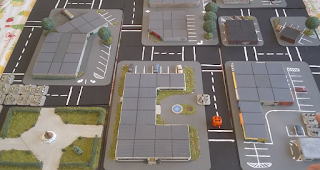 Definitely a beer-and-pretzels game, it uses a simple AI to maneuver the rioters about, and the player tries to limit the damage with his small number of security forces.  The first check on the player is an AP roll of 1d6, each pip of which allows one unit to move or attack.  That makes it harder to split your forces because it limits how many stands you’ll be able to use from turn to turn. 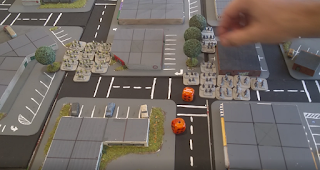 Combat is a simple 2d6 roll off for each matched pair of bases, with a few modifiers for supporting units or flank attacks on the mob or for weapons hot.  It’s quick and dirty, and the cops don’t have nearly the advantage one might expect. 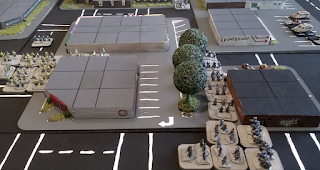 It turns out the better tactic for cops is to simply stand off and try to herd the mobs away from their targets.  You can exert some control over the AI – or at least influence outcomes – by staying close to a mob, but not directly engaging unless you really have to. 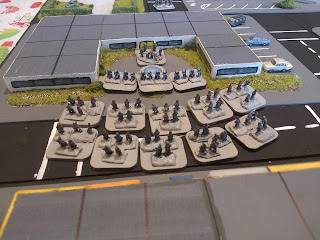 Which leads to a very fluid game, and from all I’ve seen on TV these days, pretty well mimics the ebb and flow of protests in the streets.

More to the point, the game is a lot of fun, and can provide some insights into a warfare of a very different sort.