Miniature wargames in general, and historical wargaming in particular, are headed down the same road as every other hobby out there. 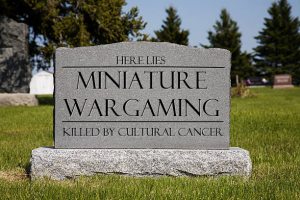 You’d think those with an interest in history would be better prepared to learn from the history of other hobbies, but it doesn’t look that way.

A lot of ink is being spilled and chit is being chattered about how to save the hobby from… well, from something that can’t really be shown or identified.  It has lasted sixty years, it has literally hundreds of manufacturers ticking along, massive numbers of players, and if we didn’t live on Planet Stupid, would have multiple conventions in every state throughout the year.  If anything the problem is that it is too healthy and robust.

And it is relatively untouched by the Death Cult.

As a rearward looking hobby mostly done by literate white men, it can’t be allowed to stand as is.  Wholesale changes must be made, you see.  To save it from itself. 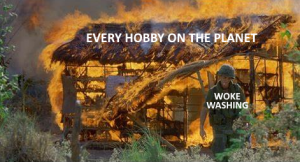 It’s early in the campaign yet, but the forces of Teh Suck are making noises and inroad. It has taken longer than in most hobbies, because of the high barrier to entry.  You have to be literate, and tactically minded, and willing to spend long hours painting and modelling and researching and shopping, and read a lot of books on history, and be good with your hands.  That’s a tall order for your average Wokelet who doesn’t want to do the work – xhe just wants to be in charge.  And wargamers are very much a ‘show me the receipts’ bunch of guys.  They won’t listen to you if your figures have the number of buttons on their uniform that were not introduced until six months after the battle being recreated on the table.

In short, they are autists who love the game more than personal relationships.

But as with all things simple and wholesome and good, it only take a few cracks for the rot to set it.

Honestly, I’m not sure where it started, although I can’t help but cast a jaundiced eye at the recent spillover of mid-range thottery from the D&D realm into the Warhammer painting realm, but in recent weeks things have reached a bit of a tipping point.  Maybe its those invested in the hobby looking for a way to establish their “please eat me last” bonafides as the orcish hordes parade past their downtown apartment building?

As I said, it’s early. We’ve got maybe a year or two before it becomes obvious to the old guard.  A year or two for the old guard to coalesce around an old-school alternative subculture, and then another year or two for the normie wargamers to wonder why all of these improv actors and historical fan fic writer and ‘shippers claim to be wargamers without ever touching a figure or rolling a pair of dice.  Another couple of years for the full collapse, and in about ten years I’ll pick through the rubble to see if any survivors want to see what real miniature wargaming is all about.

Expect more updates as the dominoes begin to fall.  I’ll resist where I can from within teh commune-ity.  Here is where I pop my head up to keep you non-wargamers appraised of how things go on that front.