Don’t bother with this.

It should have been a slam dunk, but it falls prey to all of the usual sins of the teen years of filmed fiction.

The plot is pretty basic.  A mad scientist messed around with viruses hoping to recode his sick daughter’s DNA to save her life.  His financiers took his daughter away to use as leverage against him, but a badass warrior woman rescued her and trained her to be a ninja.  Then the Evil Corporation took his research and locked him away in a nut-house where he sent coded messages to his daughter via a two-issue underground comic book.  The first issue of said comic book was an underground hit, but the second was never published.  The series revolves around our plucky heroes and the Evil Capitalist chasing after the comic book MacGuffin.

It does a few things right, and cuts against the usual grain of GloboHomo’s messaging.  It shows plant-based meat as suspicious and prone to unintended health consequences.  The idea that the earth is too crowded and a culling necessary to save the planet is, for once, accurately shown as an unmitigated evil.  Rainn Wilson is seriously under-rated as an actor, and he gives a fine performance here as the independent viral researcher attacking the central problem of the show from a more practical angle than chasing mysterious comic books.

But it also is just an ugly show.  The cinematography is wonky, the sets grimy, the characters homely, and it flirts with the idea that good people can do a lot of really really bad things, and remain good because circumstances, y’know?  The badass ninja chick is as ugly on the inside as on the outside – her every action is contemptible – and then the show wants the viewer to feel emotions for her other than contempt because that’s where we are in this episode?  Whatever, show. 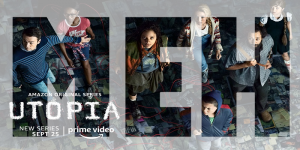 It also steers hard into the usual “all the tough characters are women and all the damsels in distress are men” skid so typical of modern film-making.  Combine that with a predilection for casting dweebs and beanpoles as the the goon enforcers that work for the conspiracy, and it shreds an already stretched to the breaking point willing suspension of disbelief.

I’d go deeper into the mistakes it makes, and why despite a killer concept the show steps on every film-making rake laid out before it, but honestly, it just isn’t worth the trouble.  It’s not the worst show, and if you can swallow a whole lot of blue pills before each episode, you’ll probably enjoy it.  On the other hand, why watch blah when you can read awesome:

From the reviews: “When you read Jon Mollison you learn to expect the unexpected. Everything about this book was a surprise. It’s a cross between Shane & Mad Max, with a dash of 60’s hot rod movies. It ends in classic Western style with a duel, but it’s not a typical duel…”