This movie starts out great, slips to mediocre, then plunges headlong into completely stupid.  In a way, it is a nice little Lovecraftian homage complete with a black pharoah looking to open a doorway to hell, opposed by a young and out-of-his-league cop.

Unfortunately it doesn’t live up to it’s premise.

Let’s start with the opening scene where two rednecks shoot and burn a woman to death just outside of a decaying brick house out in the woods.  It could be a hell of an in cinema res opening, except that the audience already knows the woman is the host for some otherworldly and supernatural thing.  The undercutting of the tension in this scene presages what will happen throughout the film.

The film does the same thing later, when our hero cop experiences his first brush with the monster – it isn’t a brush so much as it is a loving embrace.  The tentacles come out early, and any mystery gets blown to smithereens by that.  Most of what follows isn’t so much scary as it is just gross.

And then again, the climax of the movie sees the revelation that the major cultist has pursued researches down paths man was not meant to travel, and now stands on the brink of reshaping all of reality, time, and space in his insane and savage vision…but first he has to taunt one meaningless cop for ten minutes.  Bwuh?  Priorities, ancient and ruthless and infinitely powerful entity – priorities!

A film with this much hamfistery might work if the decision to focus on the exploration of the characters was handled a little more deftly.  Or if the supporting cast had more to recommend them.  Normally, films give the viewer a reason to feel something for the characters, so that their deaths have more impact.  Here, the writers give us a cast of supporting characters who are too dumb to like or to unlikable to care about.  That gives most of the gruesome deaths as much punch as a feather.  They aren’t characters so much as walking sacks of meat that go ‘splodey real good. 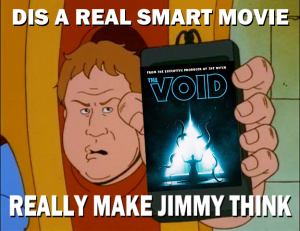 The good?  I guess the special effects are solid.  And the last couple of shots are bold and touching.  The rest of the film did little to earn the character moment inherent in the last shot, and yet the somewhat happy ending is a great cliffhanger that might inspire an interest in a sequel if it followed a better film.

It’s just not that good.

Go watch Blow the Man Down instead.