Skip to content
Behold, the first teaser image of the Totally Not the Austrian faction for the Wars of the Trossian Succession.

It feels darn good to jump back into the historical saddle after a too long hiatus.  Yeah yeah, imagi-nations are barely historical but whatever.  Let me walk you through some of the process.

This project involves a whole lot of first times.  It’s my first foray into 2mm gaming.  It’s my first venture into a umpiring a grand-strategic game designed to generate tabletop battles.  It’s my first toe-dip into the black powder era.  That’s a whole lot of uncertainty to deal with in a project.
To help ease into things, I’ve had to make a lot of concessions to gaming.  Irregular Miniatures, God Bless ‘Em, sell pre-made army packs for use with their black powder rulesets.  It looks like the army packs have been designed with Irregular’s house rules in mind.  At this point it is too early to know whether that composition would have worked for my preferred ruleset.  At the same time, it is too late to ever know, because I’ve swapped out a few strips of figures here and there.
For example, my Totally Not French army comes with very little in the way of cavalry.  Very little.  Which might work for a Marlburnian game, but would leave them at a distinct disadvantage in a battle set closer to the Napoleonic era.  Fortunately, the 2mm soldiers are enough like each other that you can swap strips around fairly easily.  Provided your rank and file blocks are the same size, they can be swapped around with impunity.  This allowed me to achieve a more reasonable balance between and among the various nations.  The Not-French are still a little light in the Cavalry department, and the Not-Russians have very little heavy cavalry on hand. 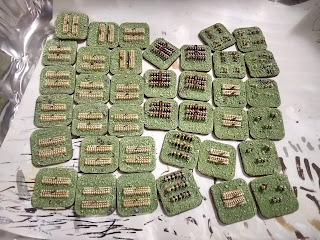 Which brings us back around to the NotAustrians.  My first ever 2mm army, they turned out pretty good.  Yellow on white with a bit of red thrown in for flare, they stand out against the light green bases and stand together as a unified team.  Sure, they are a bit monolithic, with no variety in and among the regiments, but at this scale that is of little matter.  The figures could easily be painted with more variety if one were looking to recreate a specific battle, it just isn’t appropriate for Tros.
Of course, it’s easy to distinguish armies when you only have one.  Check back in a week or so to see how these units compare to the NotRussians.
Making Adventure Fiction Great Again
Subscribe today to be first to hear about my new release, plus receive a copy of a free fantasy novella!
Follow