The Death Cult made a lot political hay four years ago out of a picture of the National Mall taken four hours before the God-Emperor was sworn in.  “See, he has no support,” they crowed.

This year, thanks to their own Fake Flu fearmongering, they faced the daunting prospect of that tactic boomeranging back to smack them in the face.  The mall was always going to be empty this year.  They needed an excuse for it, and created that excuse by paying the Usual Suspects to steer a mob into the Rotunda, thus allowing them to lock down the city and handwave away the utter contempt Americans have for President Meatpuppet. 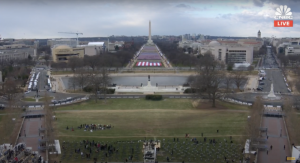