Sometimes the best way to fight…is not to fight at all.

Today we’re talking about some painful lessons learned from a game of 2 x 2 Napoleonics.  It has taken me an embarrassingly long time to get a handle on how to work this ruleset.
In the Battle of Lake Sambee, an overwhelming force of Albans are invading the Tenebran Nation, looking to return the city of Grandepoint to the Alban fold.  Or to return the Grandepoint silver mines to Alban control.  Tomato, tomahto.
Here’s the general run of things.  As you can see, the Albans brought a large force up between the lake in the center a small farm on the north.  The Tenebrans, led by a very skilled general, took command of a large hill whose flanks were secured by heavy woods to the north, and swamps and light woods to the south.  A very defensible position.
Undaunted, the Albans used cannons to secure the farm on their left flank, and tasked a smaller blocking force in the south to secure their right. 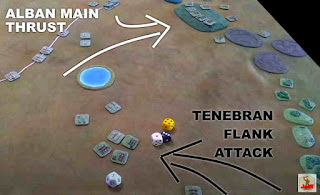 Thanks in large part to my n00bishness, the Alban attack failed spectacularly.
The Alban right fell apart so quickly it put pressure on the center to make a move on the hill before they were really prepared.  That main attack had to break off units to reinforce the right, costing them even more momentum.
In retrospect, the Albans should have brought all their artillery – six to the Tenebran two – forward to long range and pounded away at that hill for as many turns as it took to scramble the lines, and then sent in the horses.  They had time, but pushed forward too fast.  Or, since the win conditions relate to the number of stands destroyed, they should have hung back and used everything they could to destroy that Tenebran southern flanking force before turning their attention to the hill.
Or perhaps the Alban artillery should have gone full Grande Battery, set up at 8-inch range, and just pounded that hill into rubble. Turns out a Napoleonic approach to Napoleonic wargames is a winner! Who knew? Part of it is on the nature of things. 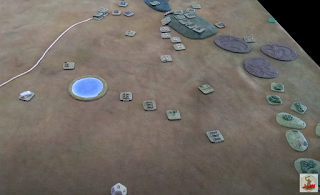 This comes up in later episodes, but is worth a blog post. After determining the terrain, setting up the physical space and the units, and getting everything ready to go…sometimes its obvious the smart play for one general is to refuse battle. The Albans should have backed off and waited a few days to come at the Tenebrans from a position of – if not advantage, at least less of a disadvantage. Particularly so, given that this is part of a much larger campaign where no general can afford to make a ‘throw away’ attack.
Calling it quits without firing a shot would mean all the set up was for naught!  Like so many generals before me, I had to learn the hard way that a poorly conceived attack is a far larger waste.  And that is a hard lesson learned on my part.
But we’re getting there.  Always learning, and always improving, that’s part of the Joy of Wargaming.
If you want to watch the whole battle, you can find it here:
Making Adventure Fiction Great Again
Subscribe today to be first to hear about my new release, plus receive a copy of a free fantasy novella!
Follow