You guys might like this one. The marketing kind of kills a big reveal – suprise! there’s an alternate earth and our main character’s double shows up in “our” timeline to wreak havoc.  J. K. Simmons plays two very different Howard Silk’s – one casual and friendly if a little timid, and the other a stone-cold badass – to perfection.

Two problems: It’s a little woke, a little gratuitous, and a little slow.
As to the first, it has the obligatory lesbian ninja-waifu who can kill men twice her size in hand to hand combat. If you can get past the alternate earth, I guess the super-hero element isn’t too big a hurdle, but it definitely drains a lot of the stakes from the violence, given that literally anything can happen. 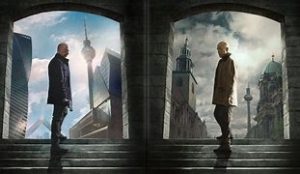 Anyway, I don’t want to reveal too much. It’s a slow burn spy show that touches upon the mixed blessings that arise of out having an answer to the questions of “what if” and “what might have been”. It’s a lot like “True Detective” in the way it seamlessly merges the central narrative with a bunch of family and relationship drama – with the added frisson of meeting a second wife or husband or daughter who isn’t quite the same person as the one you know.  It has no answers, just explorations of the sort that sci-fi cinema used to do well, but which has been completely relegated to the small screen lately.
How these to Earths come together, the differences between them, the conflicts that arise out of the meeting, and what’s really going on kind of linger and slowly reveal themselves is masterfully handled. And it takes place in Berlin for that added Cold War Spy Game feeling. Pay close attention and it will really pay off later.
I’m only into the fourth episode so far. It might run off the rails later, but these early episodes are great.  Will post an update later if the show jumps the shark.
Making Adventure Fiction Great Again
Subscribe today to be first to hear about my new release, plus receive a copy of a free fantasy novella!
Follow