Back in the early 1990’s director Joe Dante (Matinee, Gremlins) made a little low-budget anthology show called Eerie, Indiana, that deserves a lot more love than it gets.

The simple premise is that 14-year old Marshall Teller’s family drags him from New Jersey to a small town in Indiana where he immediately notices strange doin’s are a foot.  He seems to be the only one to notice these things but quickly finds an ally in ten year old outcast and noticable ginger, Simon Holmes and ohmygoshIjustgotthatreference. 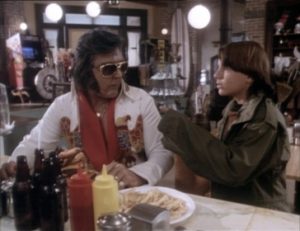 This is X-Files for the younger set, and if you can get past the 22-minute format and the sometimes janky special effects, you’ll find a show that hits just the right spot for families.  Each week Marshall and Simon experience a new bit of weirdness, and these vary from classic ghost-stories to alien encounters to wahoo scientific silliness.  Sometimes goofy, sometimes creepy, and sometimes poignant – and someti mes all three at the same time  – as you might expect from Joe Dante.  You never know what you’re going to get from episode to episode.  It might be a teen romance that spans a hundred years one week to a walk through the liminal spaces that exist outside of time as we know it, or nu-tech gone horribly wrong.  The Mummy, Wolfman, and Elvis all make appearances.

Add to that a light touch when it comes to the preaching life lessons, sly little in-jokes that only parents might get, and some truly inventive Twilight Zone style storylines, and it’s the kind of show that a man can settle down to enjoy with his younger children.  Jaded teems might find it hard to sit through, but up through the age of ten or so, it’s the perfect introduction to horror, sci-fi, and a healthy skepticism. 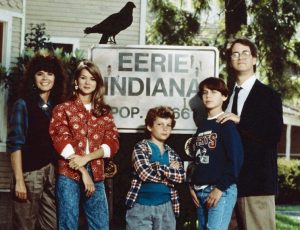 Two little touches real seal the deal on this show.  For one, the central relationship between the main characters.  It’s an odd friendship between a younger teen eager to grow up and a pre-teen eager to be seen as older than his years.  A few episodes deal with Marshall’s choices to spend his time with a good-hearted, but lonely, younger boy.  There’s a kindness and brotherly affection present here that one doesn’t often see in kid shows, and less so by the year.

The other thing, and it’s hard not to notice these days, is how the show highlights that, by noticing the oddness around him, Marshall is the odd man out.  Or perhaps it is Marshall’s refusal to turn a blind eye to the oddness that makes him the odd man out.  In a few scenes scattered throughout the series, corrupt authority figures shine a spotlight on this fact.  In speeches all-too-relevant-to-today, they point out that the citizens of Eerie aren’t stupid – they know things aren’t right – but they know it’s easier just to go along with it.  Kind of ignore it.  Keep your head down and find a way to compartmentalize the things they see that just shouldn’t be so.  The show clearly views Marshall as a hero for refusing to abide by the wishes of the authorities – his rejection of the veil everyone wants to draw over his eyes is presented as a good thing.  He questions and objects both to the lies and the complacency that surround him.

And I can’t think of a better message to impart to our children – particularly in these clownish times we call the Modern World.