Got another big blog for you fans of old school tabletop RPGs.  This time around we’re taking a look at a longish game of ACKS, Autarch’s excellent Adventurer, Conqueror, King. 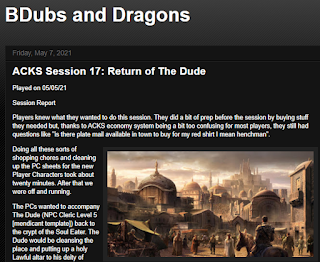 This is another one of those new-old campaigns that takes advantage of certain lost secrets to present a style of gaming that fell to the wayside early in the hobby.  A constantly changing roster of active PCs.  Faction play.  Real time.

BDubs and Dragons is up to seventeen sessions as I type this, making now a good time to jump on board.  There’s enough to help you kill a slow day at work, but not so much as to feel intimidating.

Written by one of my favorite Twitter follows, it features a rotating cast of characters, many of whom are inspired by notorious internetizens.

The Dude but he’s a cleric.

You know, all the usual internet types.

He usually starts off each post with some little gem of observation about the game in general, what he tried that worked, and how he rolled with the punches thrown by his spastic and unpredictable – and all the more fun for it – players.

Is prep a waste of time? I haven’t ran my game for three weeks and spent some of that time preparing for the players to go off to a new dungeon. I thought about making a bespoke dungeon but instead chose a one pager I had lying around and will re-purpose its monsters and mise en scene as needed. This is because there’s not a huge chance the players will go there any time soon. Why spend an hour or two drawing it up?

I also drew up the treasure map the players found last session, using my kids’ crayons. The players never asked about it.

I also ran a two week mass combat military campaign with my dad which echoed into the region and the players hooks and options. Worldbuilding through wargaming! But this didn’t come into play much this session either.

Games that cross the boundary into other games?  Are you allowed to to that?