Reading through some old Featherstone books, I’ve been bit by the Napoleonics bug.  Maybe it’s age and the fear of not getting to the things I always meant to get to, but whatever the reason, I’m eyeing horse, foot, and guns.  More than eyeing, I’ve been slapping paint!

The gun on the right is new, and matches up well with my other cannon.  I bought a crew in older uniforms painted in gray to allow them to be used for either side.  Meanwhile, four French cannoniers stand by to serve.  All eight are from Irregular Miniatures, but I think the guns are from Eureka.
Okay, these Frenchie bois are really suited up more for fighting in the French Revolutionary wars, but whatever.  My Brits are suited up for the American War of Independence.  Squint.

This unit of line infantry are also from Irregular and they paint up really well.   I’ll throw together a comparison shot of Irregular with Eureka figs next time. 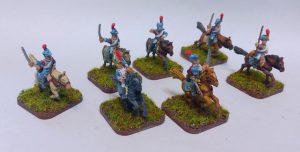 Meanwhile, I’ve even got some horse boys, seven in all, to go with them.  With all of this done, I now have enough forces to start playing around with Osprey’s “Chosen Men“. 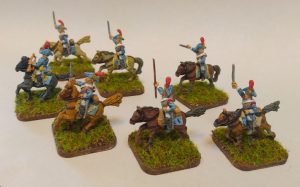 Eureka just send me more metal figs so that I can expand my current 300 points of Red vs. Blue and add in some variety.  Then maybe we can think about running a Featherstone map based campaign just like they used to do.