Remember when I said the following?

[W]hen a critical mass of people adopt [the lost art of Gygaxian campaign play] for their own table, you can expect a deluge of smart-boy posts from the Usual Crowds staking a claim to have “always known” about the glories of real-time and always-on gaming.

This is another aspect of old school play that I think is forgotten nowadays: the play of multiple characters. In my House of Worms campaign, this is not unusual. Most of the players have several characters whom they can play at any given time, depending on what is happening in the session.

It’s nice to see a recognition of the value of Gygaxian play.  Really looking forward to Jimmy Mal discovering the value of 1:1 timekeeping and having always used it but just never got around to mentioning it until lately.  Grognardia is also on the cusp of discovering the joys of faction play all on his own from reading the Big Three D&D books and just about ready to tell you all about his breakthrough realizations that he had all on his own.

Not even being ironic or sarcastic here*.

The guys who have been pushing the D&D envelop and making Real D&D sing for the last year or so have been pushing back against some pretty stiff resistance.  To see others adopt and claim the OG (Original Gygax) for their own is gratifying.  While I can’t speak for the rest of that crowd, I can speak for myself when I say that I’m not pushing this new/old style of play for my own gratification.  I genuinely want to make play better at your table, and if it takes time for these ideas to percolate through the culture deep enough for the smart boys to pick up the signal and run with it – great! 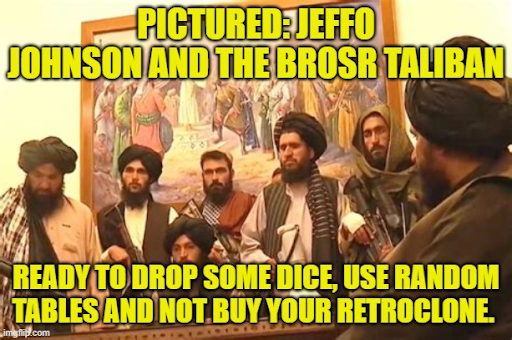 Heck, J-Mal probably doesn’t even understand where this new shift in the conversation came from.  It’s just…you know…this thing that’s out there or whatever.  You can’t explain it, it’s just one of those “nothing can stop an idea whose time has come” things.  It’s just what people who shall remain nameless because everybody is talking about it are talking about.  And hey, if it’s an idea that needs somebody to jump in front of the parade dedicated to it, rest assured there are plenty of people trying to sell you products who are more than happy to jump in front of the band.

Meanwhile – you and me? – we know where these discussions come from.  We know who to watch to see what people will be talking about next month, and why.  We know why people are talking about last month’s news.  As usual, we’re one step ahead of the crowd and already turning our attention to deeper mysteries.